PETER MAYHEW
(May 19, 1944 - April 30, 2019)
[Source: Yahoo!News] The Star Wars universe is mourning as news broke today of the death of one of the franchise’s most beloved — and most towering — cast members: Peter Mayhew, the 7-foot-2 actor who played Chewbacca in five movies, died Tuesday at the age of 74.

"The family of Peter Mayhew, with deep love and sadness, regrets to share the news that Peter has passed away," they wrote. "He left us the evening of April 30, 2019 with his family by his side in his North Texas home."
Mayhew wore the iconic “fuzzball” suit as Han Solo's hairy and unintelligible Wookiee sidekick in the first three Star Wars movies (1977's A New Hope, 1980's The Empire Strikes Back and 1983's The Return of the Jedi) as well as the 2005 prequel Revenge of the Sith. He also played Chewie in the notorious 1978 Star Wars Holiday Special, which focused on Chewbacca’s family as they prepared to celebrate the Wookiee holiday of Life Day. 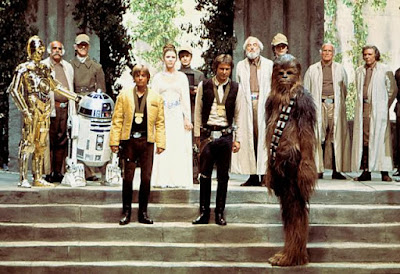 A native of Barnes, Surrey, in the U.K., Mayhew returned to the hirsute role for 2015’s The Force Awakens. But because of chronically bad knees (he spent much of his offscreen time in a wheelchair or using his trademark lightsaber-shaped cane), Mayhew had to split the duties with Finnish newcomer Joonas Suotamo, a former basketball player. While he was physically unable to perform again after that film, Mayhew served as a consultant to Suotamo for 2017’s The Last Jedi and last year’s spin-off, Solo: A Star Wars Story.


At the time, Suotamo posted on Instagram that “Peter’s guidance and kindness have been invaluable gifts which warmed my spirit and prepared me for this journey. I aspire to make Peter proud and bring Star Wars fans the Chewie they know and love.”

A “devastated” Suotamo responded to Mayhew’s death on Thursday. “Peter’s warm welcome when I came aboard as his double on The Force Awakens meant so much to me,” he said in a tweeted statement. “Studying the character he helped create was always a daunting task, but one that was made easier by his tutelage and kindness as we sought to bring Chewbacca to life for a new generation. He was an absolutely one-of-a-kind gentleman and a legend of unrivaled class and I will miss him.”

George Lucas, who hired Mayhew to play a character affectionately dubbed a “walking carpet,” issued a statement calling Mayhew “a wonderful man. He was the closest any human being could be to a Wookiee: big heart, gentle nature — and I learned to always let him win. He was a good friend, and I’m saddened by his passing.”

Harrison Ford, Mayhew’s co-pilot in the Millennium Falcon for four films, released a statement praising his late colleague. “Peter Mayhew was a kind and gentle man, possessed of great dignity and noble character. These aspects of his own personality, plus his wit and grace, he brought to Chewbacca. We were partners in film and friends in life for over 30 years and I loved him. He invested his soul in the character and brought great pleasure to the Star Wars audience.

“Chewbacca was an important part of the success of the films we made together. He knew how important the fans of the franchise were to its continued success and he was devoted to them. I and millions of others will never forget Peter and what he gave us all. My thoughts are with his dear wife Angie and his children. Rest easy, my dear friend.”


Star Wars icon Mark Hamill also paid tribute on Twitter, writing that his longtime co-star “was the gentlest of giants. A big man with an even bigger heart who never failed to make me smile ... a loyal friend who I loved dearly. I'm grateful for the memories we shared [and] I'm a better man for just having known him.”

Mayhew’s family posted that two memorial services are being planned for him — one for friends and family on June 29 at an undisclosed location, and an additional event for fans in early December at EmpireConLA in Los Angeles.

Mayhew is survived by his wife, Angie, and three children.
Posted by anim8trix at 12:00 AM