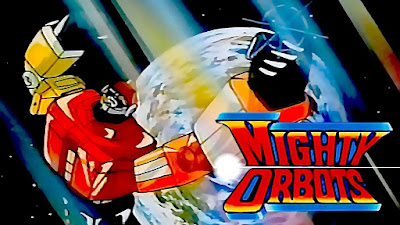 MIGHTY ORBOTS
The series lasted only a single season of thirteen episodes, mostly due to a lawsuit between the show's creators and toymaker Tonka, who accused them of basing the cartoon on their GoBots franchise (which was adapted from Bandai's Machine Robo line). The robot depicted in the show bore a resemblance to the robot in the anime for Bandai's Godmars toy with different colors. However, the Godmars toy was not among the Bandai figures utilized by the GoBots line. The episodes aired on ABC and some episodes were later released on VHS by MGM/UA Home Video. Despite its short run, the series has a dedicated fan base today. The series' narration was done by voice-actor Gary Owens, who was the voice of Hanna-Barbera's Space Ghost in the 1960s and Dynomutt, Dog Wonder's human straight man Blue Falcon in the late ...The 23rd Century, the future is a time of robots and aliens. The people of Earth have banded together along with several other peaceful alien races to promote peace throughout the galaxy, forming the United Planets. As part of the United Planets, the Galactic Patrol — a body of law-enforcers — works to maintain order, under the leadership of Commander Rondu.

However, a powerful criminal organization called SHADOW is out to destroy both the Galactic Patrol and the U.P. Led by Lord Umbra, a massive cyborg-computer, SHADOW employs sinister agents and incredible schemes to attack and someday rule over all corners of the known-galaxy.

There is one thing that helps to fight against SHADOW: ingenious inventor Rob Simmons — secretly a member of the Galactic Patrol — creates six special robots who can use their unique powers to battle against the forces of Umbra. Together, these robots can unite to form a giant robot called Mighty Orbots, to fight for truth, justice