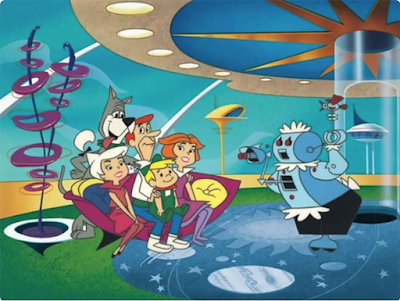 Here’s Why Fans Think ‘The Jetsons’
Character Was Born July 31, 2022
[Source: Yahoo!news] Roughly 50 years after the first episode of “The Jetsons” premiered, fans are gearing up to celebrate the birth of George Jetson, which according to lore, is July 31, 2022. But is that really his birthday?

On Thursday, a hawk-eyed fan pointed out that “someone is about to give birth” to the show’s main character, via a fan site listing the family patriarch’s exact birthdate.

The animated sitcom created by William Hannah and Joseph Barbera took place in the 21st century. Although no mention to a specific year was ever made in the show, promotional materials and articles from the time explained that it was set exactly 100 years in the future, according to MeTV. 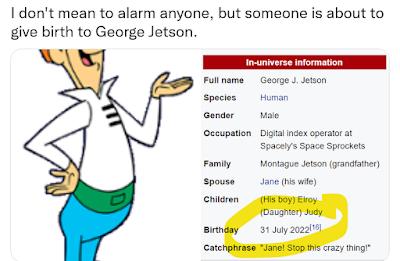 The arrival of Jetson’s birthday six decades after “The Jetsons” debuted on ABC feels strangely fitting for a classic ’60s animated series that envisioned us all living in outer space by 2022.

If that makes you feel old, you’re not alone. In light of the news, the internet has been reflecting on their feelings about the show and how they wished reality mirrored its version of the future.

“This information about George Jetson’s birthday has me going through the five stages of a midlife crisis,” tweeted one user. “I hope Robot maids are invented soon.”
▶ Watch the TV Opening
Posted by anim8trix at 12:00 AM