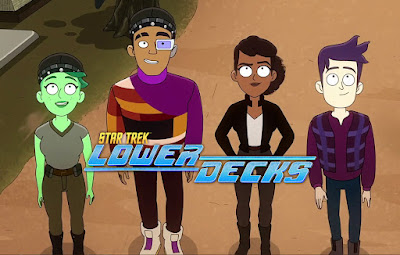 LOWER DECKS: Season 3
Catch up with the crew of the U.S.S Cerritos in the
official trailer for Star Trek: Lower Decks Season 3.
▶ Watch the Trailer
With Captain Freeman (Dawnn Lewis) on trial following the Season 2 finale, Mariner (Tawny Newsome), Tendi (Noël Wells), Boimler (Jack Quaid), and Rutherford (Eugene Cordero) are in for a host of new adventures--including a trip to Deep Space 9. Stream the Season 3 premiere of Star Trek: Lower Decks on Thursday, Aug. 25, exclusively in the U.S. on Paramount+.
Posted by anim8trix at 12:00 AM