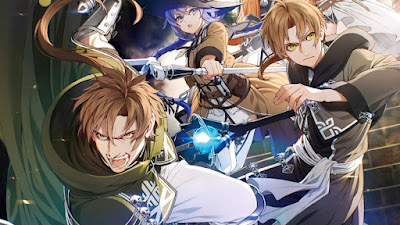 Mushoku Tensei: Season 2
Last we saw, Eris had left Rudeus to venture on her own in hopes of becoming strong, and the same was the case with Ruijerd who left in search to find other members of his Race. The OVA that was released in March 2022 showed specifically what Eris was doing to get stronger while in the Holy Land of the Sword. As for what’ll happen to Rudeus in Mushoku Tensei: Season 2, well, he’ll head to the city of Rosenburg to find his mother Zenith. Completely alone now, Rudeus also takes on an A-rank mission to spread his fame, although that’s a risk that may have repercussions he doesn’t realize.
▶ Watch the Trailer
Posted by anim8trix at 12:00 AM