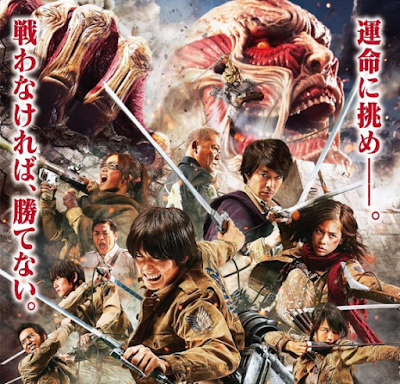 ATTACK ON TITAN
A brand-new trailer for the Japanese live-action Attack on Titan movie, adapted from Hajime Isayama's highly popular Attack on Titan manga, has been unleashed. The trailer unveils the live-action version of the story's signature 3D maneuver gear, seen here in action for the first time, and you can see it below.

Narrator: Over 100 years ago…
Narrator: Most of humanity was consumed by the Titans who suddenly appeared.
Text: Titans who suddenly appeared, consuming humanity Narrator: Civilization collapsed.
Narrator: The survivors of the war with these Titans erected giant walls three layers deep and kept the peace.
Narrator: But today, our invulnerable security no longer exists.
Text: The colossal live-action film adaptation project
Text: Creator: Hajime Isayama Voice: The rumors were true.
Voice: They're immortal.
Text: Director: Shinji Higuchi
Text: Special Effects Director: Katsuro Onoue
Kubal: Why don't we take back the plundered city? To carry out this honorable operation, we offer our hearts!
All: We offer our hearts!
Mikasa: The world is cruel
Text: Why did the Titans appear…?
Voice: I want to know the truth about this world!
Voice: If we fail, humanity is doomed.
Voice: A Titan attacked Titans
Mikasa: Eren…
Text: Why does humanity fight…?
Voice: Let's go!
Voice: We're humanity's last hope!
Voice: I've never experienced anything like this!
Text: Challenge fate! Mikasa: We promised, right?
Eren: Mikasa!
Voice & Text: Attack on Titan
Text: Is this world cruel?
Mikasa: We were together, always.
Text: Attack begins 8/1!!
Text: Part II 9/19