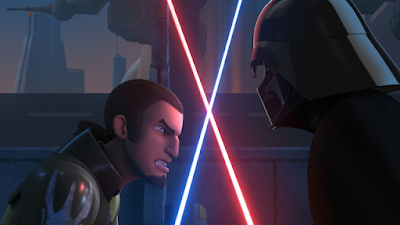 STAR WARS: REBELS - Season Two
SPECIAL EVENT - JUNE 20
(Source: blastr.com) The launch of Star Wars Rebels last fall was a refreshing odyssey into the foundation years of the Rebellion and a sterling example of Disney magic while rolling out its shiny new Star Wars Universe after the entertainment empire's purchase from George Lucas in 2012. The second season airs on Disney XD on June 20, and anticipation is simmering as we count down to even more delicious Star Wars candy in December.  To prime you for the perilous Season 2 one-hour special, we've got a new trailer entitled The Siege of Lothal, with Darth Vader dispatched to Ezra's home planet of Lothal to hunt down the freedom fighters responsible for the the death of The Inquisitor and destruction of Grand Moff Tarkin's flagship Star Destroyer, The Sovereign.  Have a look as lightsabers flare, dire punishments are declared and the galaxy is alive again with the epic swirl of battling spaceships.