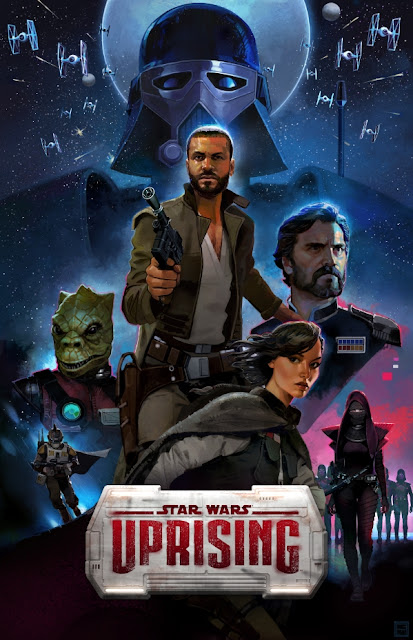 STAR WARS: Uprising
Fills the Story Gap After
Return of the Jedi
Daniel Erickson is the developer of a brand new Star Wars game, but when he talks to me about working on his project with Lucasfilm, he sounds more like a secret agent.

“For some of the story stuff, literally, I have to go into a room by myself and carry nothing, and read a script or a piece of paper, or a description, in a white room under guard, and then walk out with nothing.”

Erickson is the senior design director on Star Wars: Uprising, an upcoming mobile game that takes place directly after Return of the Jedi. Its storyline is canon – official Star Wars lore – and to ensure Uprising doesn’t contradict the stories told in other properties, like The Force Awakens, Erickson is occasionally treated to very, very private bits of story.

Since Lucasfilm wiped away most of the old Expanded Universe in 2014, new canon has been created through books like Lords of the Sith, shows like Rebels, and comics like the Darth Vader series from Marvel. Kabam, the developer of Uprising, has the unique privilege of creating and sharing some of the first official details to follow the last chronological film, Return of the Jedi.

I asked Erickson for some tasty Uprising story details. Here's what we know:

After Episode VI, word of the Emperor’s death quickly spreads throughout the galaxy. When the news reaches the Anoat sector – which contains classic Star Wars film locations like Hoth and Cloud City – local Imperial Governor Adelhard locks down the entire region. This “Iron Blockade” stops all incoming and outgoing space traffic and communications, trapping the people within.

Adelhard denies all “rumors” of the Emperor’s death and kills anyone who speaks otherwise. According to Erickson, Adelhard is a “true believer who mourns the death of Vader and cannot imagine that somebody would want to live in chaos.” In his own private world he’s made for himself, the Empire is still all-powerful. Life is normal, and he maintains control with his enforcer, Commander Bragh, the leader of the Purge Troopers.

The Rebels were chased from the Anoat sector following their defeat on Hoth in The Empire Strikes Back, and their presence in this part of space is still relatively weak. Instead, Erickson said, “the smuggler groups, the local assassin groups, the different crime cartels, and the former nobles of the sector have all banded together to form this very unlikely uprising – a rebel group of their own.”

Uprising uses a “no-fault” leveling system. Your levels are separate from the gear you collect, and you can swap out your skills at any time. If one skill is nerfed, and some other build is the new hotness, you’re free to switch points around and experiment. The catch? You can only have so many abilities slotted at any one time. Like swappable gear sets in RPGs, you’ll have swappable abilities to tailor to different situations.

“You can go out there and decide, hey, you know what, for the next couple of months I’m just going to try to become the best Bounty Hunter I can – and then hard pivot and say, nope, now I’m going over here and I’m going to be a Hutt enforcer. I’m going to learn these skills, and I’m going to get a really cool vibroblade and try that for a while.

Star Wars: Uprising will begin a beta roll out in select territories in the upcoming weeks. If you’re interested in playing, you can sign up here. When the full game is released this fall, it will include two chapters. The script for the third chapter is already in Lucasfilm’s hands, Erickson said, and plans to support Uprising “go years into the future.”

For more, head over to our Star Wars wiki for full details on all the Star Wars canon.
Posted by anim8trix at 12:00 AM