POWER OF THE FORCE GIRLS - Episode 1 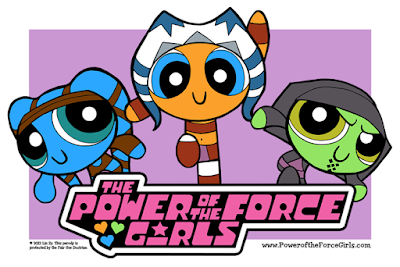 POWER OF THE FORCE GIRLS
Episode 1: Introductory Off Her!
The planet of Dagoblah...! In this debut episode of the Power of the Force Girls, Babbles introduces you to her heroic sisters and we see how Professor Yoddle created them. But not everything on Dagoblah is roses. Major Grievance spells doom about Intergalactic Gangsters and the Forces of Negative Space!

Created by Lin Zy, she writes, illustrates, animates, and even performs the voice of Babbles! The episode is co-illustrated and edited by artist Matt Busch. The sound design and audio mastering is performed by Ric Viers, who also happens to voice the Narrator. Aaron Golematis of AaronG TV voices Major Grievance, along with a few other surprises!
Posted by anim8trix at 12:00 AM