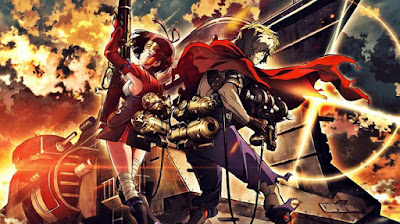 KABANERI of the IRON FORTRESS
[Source: Forbes] Anime Movie Night, a collaborative effort to bring Japanese cartoons to the big screen, has just announced its first title: Kabaneri of the Iron Fortress.

Kabaneri, the story of a post-apocalyptic society that circumvents a zombie horde by way of steam-powered trains, is a hit anime series currently available on Amazon Prime. The movie night offering will be a film compilation of the twelve-episode show, told in two parts: Part 1: Light That Gathers and Part 2: Life That Burns. The film will screen at select theaters in the U.S. and Canada.

Tickets are available beginning today at the Anime Movie Night website for the one-night exclusive screening on Wednesday, April 26. According to the organizers, 200 movie theaters will participate, and as of this writing, there are four movie theaters within 20 miles of the author that are. (The organizers said that Anime Movie Night will continue to add new theaters.)

Crunchyroll ought to know even better than its partners that traditional movie theater sales are lagging, making room for the lucrative streaming media vertical it's cornered. However, CEO Kun Gao thinks that by bringing anime to a new environment where it has only appeared rarely will encourage fans to interact with a medium in a different way.

“We want to create new ways for fans to come together and share the experience of the content they love, and cinema is the perfect medium," he said.
Posted by anim8trix at 12:00 AM