A   J   I   N
[Source: AnimeNewsNetwork] The film's setting will be Tokyo in 2017. In the film, Kei is a medical intern, with his age changed to match Satoh's.

Katsuyuki Motohiro (Psycho-Pass, Space Travelers, Bayside Shakedown) is directing the film. The live-action film project has invited the action filming team of the live-action Rurouni Kenshin films to work on the project. 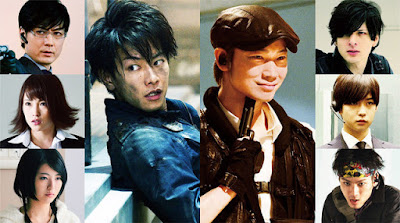 In the original manga's story, an immortal first appeared on an African battlefield 17 years ago. Later, rare, unknown new immortal lifeforms began appearing among humans, and they became known as "Ajin" (demi-humans). Just before summer vacation, a Japanese high school student named Kei Nagai is instantly killed in a traffic accident on his way home from school. However, he is revived, and a price is placed on his head. Thus begins a boy's life on the run from all of humankind.

The film is slated to open in Japan on September 30.
The manga already inspired a 3D CG anime film trilogy, two television anime seasons, and three original anime DVDs by Polygon Pictures
Posted by anim8trix at 12:00 AM