"The Pro" Comic to become a movie 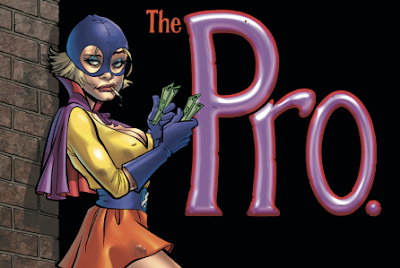 T H E   P R O .
[Source: Deadline] A lot going on at Paramount Pictures, but they are still making deals. The studio has picked up rights to The Pro, a graphic novel by Garth Ennis, Amanda Conner and Jimmy Palmiotti. Erwin Stoff of 3 Arts is producing and Zoe McCarthy has been hired to write the screenplay. She is best known for her script Bitches On A Boat.

The graphic novel writers and illustrators all have stuff going on in Hollywood. Palmiotti’s graphic novel Painkiller Jane has just attached Jessica Chastain, and he is currently writing the comic Harley Quinn along with Conner for DC Comics. Ennis is producing the AMC series Preacher, based on the graphic novel series he created with Steve Dillon.

First published in 2002, The Pro is in its eighth printing with Image Comics and Paperfilms. The logline: A prostitute who wakes up one day with superhero powers and is asked to join the League of Honor to help curb her anti-heroic behavior. The film puts a humorous twist on the superhero genre.
WATCH THE ANIMATED COMIC HERE.
Posted by anim8trix at 12:00 AM