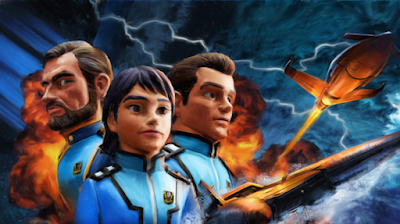 FIRESTORM
From the creator of Thunderbirds, Captain Scarlet, Stingray, Joe 90 and Fireball XL5... Gerry Anderson's Firestorm - filmed in Ultramarionation. After several years of development, Gerry Anderson’s FIRESTORM is finally on its way, starting with this exclusive minisode. Originally created by Gerry Anderson (the man behind Thunderbirds, Captain Scarlet, Space:1999 and many other cult TV shows), FIRESTORM is a science fiction adventure series. Filmed in ‘Ultramarionation’, Gerry Anderson’s FIRESTORM will be made using puppets, real sets, miniatures and practical FX - the next step in evolution from the Supermarionation series of the ‘60s.

~~THE STORY~~
The series is set in 2102. Thanks to technological improvements climate change has been brought under control, food and energy are plentiful, and violence has all but disappeared. But just when people are at their most contented, the problems start… Explosions, sabotage, large-scale thefts of military equipment, kidnapping… the only clue as to the perpetrators is a name – BLACK ORCHID. Earth’s environmental protectors – STORM FORCE – are quickly repurposed into a force to fight this mysterious assailant. Their new operation codename... FIRESTORM. As clues are uncovered, Black Orchid seems to be an alien contingent. But what are they up to? As Storm Force discover more - including strange telepathic technology - the alien explanation looks increasingly likely. But when Storm Force come face to face with Black Orchid they discover their true origins...

Find out more at the official Firestorm website: http://www.firestormhq.com