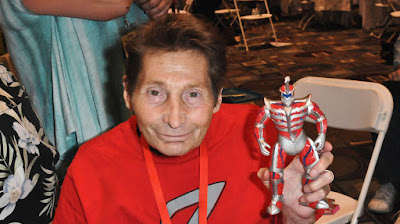 ROBERT AXELROD
(May 29, 1949 - September 7, 2019)
[Source: Syfy.com] Robert Axelrod, the actor best known for providing the voices of Lord Zedd and Finster in Mighty Morphin Power Rangers, has died at the age of 70. The news was confirmed on Twitter via Axelrod's agent, Kelly, who wrote: "It is with great sadness that I must tell you that Robert passed away yesterday. He was a wonderful soul whose charismatic personality lit up a room. He will be greatly missed." 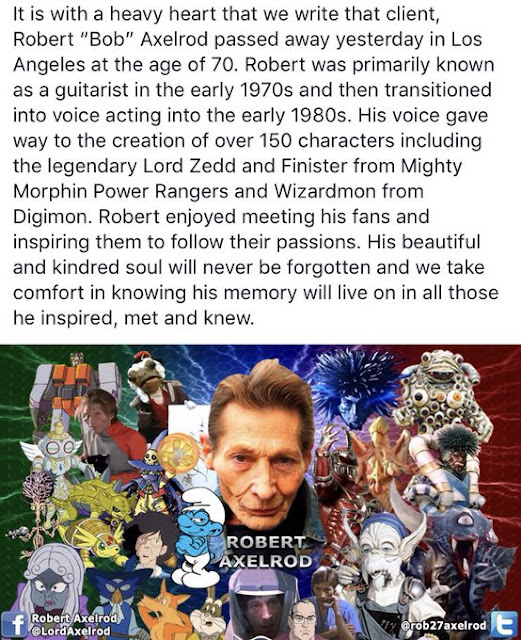 Per The Hollywood Reporter, Axelrod's entertainment career began in the 1970s when he planned on becoming a musician, spending some time as a guitarist before becoming an actor. From that point forward, he cultivated a successful career that spanned several decades and over 150 different characters.

Lord Zedd is, perhaps, the greatest nemesis the Power Rangers have ever faced. Appearing in over 100 episodes of the Mighty Morphin TV show from the 1990s, the villain imprisoned Rita Repulsa after she proved that she couldn't properly defeat the kaiju-fighting do-gooders. He'd eventually go on to marry Rita (a move that Axelrod vocally disliked), having a son—named Thrax—with her, too. Following Rita's exile in a space dumpster, Finster came under the employ of Zedd, creating monsters that were supposed to finish the Rangers once and for all.

"What I loved about Zedd was that the character had the majority of the show’s dialogue, and I like to work! Zedd had integrity, a word whose dictionary definition is 'wholeness,'" he said of his iconic antagonist in a 2016 interview. "He was wholly evil, intent on destroying 'The Power Twerps' and taking over the world … or at least Angel City. I liked the stately quality of the character, similar to Darth Vader. He wasn’t stupid and always bounced back for more. Power Rangers became the most popular show on TV in the past 20 years in its prime, surpassing Teenage Mutant Ninja Turtles in ratings, toy demand, and whatever else is used to rate the popularity of a show. I’m proud to have been part of that."
Posted by anim8trix at 12:00 AM