VINLAND SAGA
Plot Summary: Young Thorfinn grew up listening to the stories of old sailors that had traveled the ocean and reached the place of legend, Vinland. It's said to be warm and fertile, a place where there would be no need for fighting—not at all like the frozen village in Iceland where he was born, and certainly not like his current life as a mercenary. War is his home now. Though his father once told him, "You have no enemies, nobody does. There is nobody who it's okay to hurt," as he grew, Thorfinn knew that nothing was further from the truth. The war between England and the Danes grows worse with each passing year. Death has become commonplace, and the viking mercenaries are loving every moment of it. Allying with either side will cause a massive swing in the balance of power, and the vikings are happy to make names for themselves and take any spoils they earn along the way. Among the chaos, Thorfinn must take his revenge and kill Askeladd, the man who murdered his father. The only paradise for the vikings, it seems, is the era of war and death that rages on.
3:10 - 4:45    White Snake [CGI Movie] 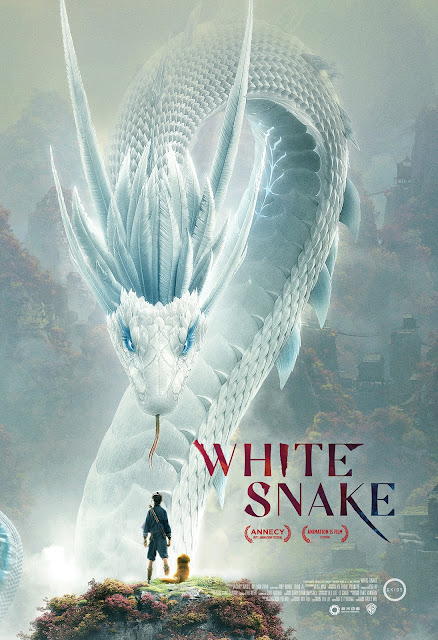 WHITE SNAKE
Plot Summary: The story follows the Chinese fable the Legend of the White Snake. The focus is on a white snake-demon Blanca who loses her memory while being disguised as a human woman and falls in love with a snake hunter. This strongly displeases her young sister, Verta, the green snake-demon.

The story begins two sisters in a traditional Chinese bath, where they both speak of immortality. It then shows that same mysterious woman (named Blanca) who is on a mission to assassinate the general. However, she is caught and is involved in a battle which results in her submerging into water and losing her memories. She is rescued by a man, Xuan, who takes her to his home, Snake Catcher village, where the villagers catch snakes for the general, as snakes were thought to aid in immortality. Reluctant at first, Blanca is skeptical about Xuan. However, after spending some time with him (and with the reveal that she has magic powers) she starts to fall for him.

They find a jade hair pin which brings back some memories when it is then revealed, that the hairpin too is magical. Xuan reads the inscription, which indicates it was made at "special jade workshop". He and Blanca go journey there together.

Meanwhile, there is a cavern of snake-demon people, who are oppressed by the general. It is revealed that Blanca's sister is alive, a soldier for the Snake master. A snake had previously seen the two together, deeming Blanca a traitor as she is with a snake-catcher. Her sister, Verta, argues otherwise and says that she will find and return her, whilst also engaging in an insurance policy- if she is not back with Blanca in three days, then the Death Scales embedded in her will explode and kill her. Back with Xuan and Blanca, after a struggle on sea with another snake-demon- Blanca is forced to reveal her demon form, revealing to Xuan that she is in fact a demon. However he disregards this fact and the two bond.

After leaving the workshop, Xuan and Blanca return to the Snake Catcher Villager. Verta confronts Blanca and Xuan and tries to get Blanca to return with her. Verta identifies Xuan as a snake catcher and tries to attack him. Blanca defends him and the two sisters fight. During the fight, Xuan and Blanca fall into a hidden underground temple.

While looking at a Daoist alter in the temple, Blanca's memories are triggered. She is shaken by the events and Xuan comforts her -- this leads to a moment of intimacy between them. Afterward Xuan and Blanca leave the temple to find Verta waiting. Blanca reveals that her memories have been returned and says she will return to the snake demon fold. She says to Xuan that their differences (human and demon) are too great. He asks her to wait for him and leaves to find a way for them to be together.

Later at the fox-demon workshop, Xuan agrees to become a low-level demon in order to be with Blanca.