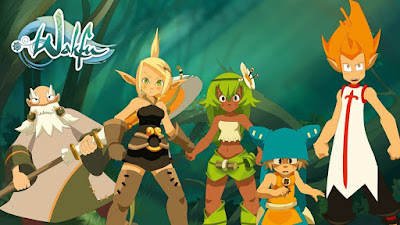 WAKFU: The Animated Series
Wakfu: The Animated Series is a anime-influenced French animated television series produced by Ankama Animation, based on the video game Wakfu. The first season of 26 episodes began airing on 30 October 2008, and new episodes would continue to air into January 2010 on France 3. The show is animated with Adobe Flash software; all the production is done in France except the special episodes "Noximilien l'Horloger" and "Ogrest, la Légende", both produced in Japan. The series is directed by Anthony "Tot" Roux, and character design is directed by Xavier "Xa" Houssin and Kim "Tcho" Etinoff.

Yugo is a 12-year-old Eliatrope who recently discovered his powers, and is on a mission to find his true family. He has lived with his adoptive father Banana, working alongside him at his inn, and has no memories of his real family. He has the ability to summon teleportation portals by rotating his hand in a circular motion and throwing them to where he would like to appear. As the series progresses, he learns other abilities, such as moving at high speeds and creating beams from his portals. Near the end of Season Two, it's revealed that he is the King of the Eliatropes. In the Special Episodes following the second season, Yugo is shown to have not aged in 6 years since the quest of the Crimson Claws, a fact that depresses him as he wishes to be able to court Amalia, but fears that his childlike appearance would hinder any chance of a serious relationship with her. The finale shows Yugo is able to utilize the 6 Eliatrope Dofus to attain godly power in an effort to defeat Ogrest but doing so costs him his brother's friendship and nearly destroys the world.

In Season 3, it is shown that Yugo and Ruel have been trying to find Adamaï everywhere, to no avail. When Adamaï, using their psychic link, shows Yugo the seeming death of Percedal, Yugo rushes to help his friend, still unable to believe his brother could be capable of such evil. It's later revealed that his actions later brought about the birth of the season's antagonist, Oropo, who is an evil counterpart of Yugo. During the final battle with Oropo, joined by Percedal and a now realized Adamaï, he and his friends are last seen in the realm of the gods. Yugo is Elely & Flopin's surrogate big brother.
▶ Watch the Animated Music Video
Posted by anim8trix at 12:00 AM