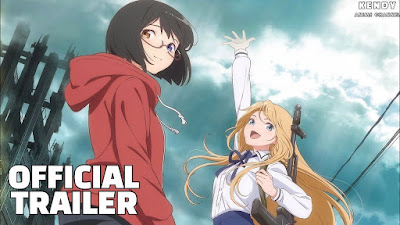 Otherside Picnic
College student Sorawo Kamikoshi explores "doors" which randomly lead into parallel worlds, in which internet creepypasta and urban legends are brought to life. Sorawo nearly dies in one of these worlds while encountering a creepypasta monster, but is rescued by Toriko Nishina, another young woman who is skilled with guns and is looking for a lost friend. Sorawo and Toriko, with the help of another woman named Kozakura, return to the parallel world to bring back artifacts and defeat the monsters, but the two are increasingly affected by the conditions of the parallel world, meet other humans who are trapped in the parallel world, and find themselves increasingly affected by each other.
▶ Watch the Trailer
Posted by anim8trix at 12:00 AM