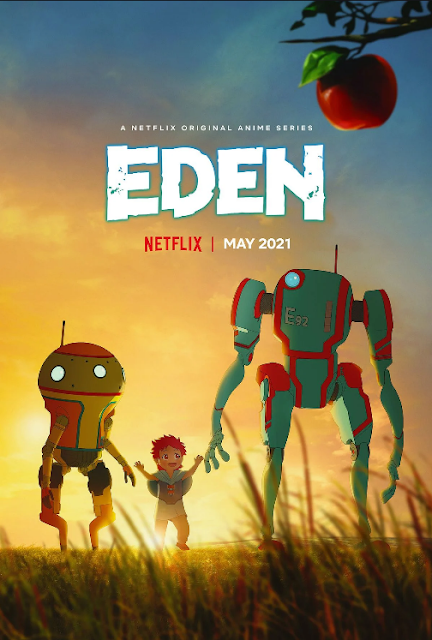 E  D  E  N
"Thousands of years in the future, a city known as 'Eden' is inhabited solely by Artificially Intelligent robots whose former masters vanished long ago. On a routine assignment, within the depths of the city, two maintenance robots accidentally awaken a human baby girl from stasis questioning all they were taught to believe-- that humans were nothing more than a forbidden ancient myth. Together, the two robots secretly raise the child in a safe haven outside Eden."  Premieres May 27, only on Netflix.
[Source: Collider] Have you ever wondered what life on Earth would be like if robots ever took over? Fullmetal Alchemist: Brotherhood director Yasuhiro Irie sure has, as his new series Eden centers around this concept. The show was a highlight of Netflix’s panel at the virtually-held AnimeJapan 2021, where the streaming giant announced its global release date with a new trailer. This news is part of Netflix's plan to release 40 new, original anime titles in 2021 — close to double the number the streamer released last year.

The show takes place thousands of years into the future as robots replaced their human creators in the population and now settle in the titular city. It takes place so far into the future, in fact, that humans have long been considered a myth or a legend. However, two maintenance robots A37 (Kyoko Hikami) and E92 (Kentaro Ito) discover a human baby named Sara (Marika Kono) in cryosleep while on a routine assignment. With their personal and societal beliefs thrown into question, the robots decide to raise the child outside of Eden in secret. As Sara grows older, she begins to learn the sinister truth about the world she was hidden from.

The new trailer has a somewhat different tone than the one released in October of last year, as it focuses more on how the universe’s robots feel about the nearly-extinct human race. However, the dynamic art style and mysterious yet engaging plot still stand out. It looks and sounds great, so get ready to add this into your Netflix queue.

Eden is expected to be Netflix’s first entirely-original Japanese anime. While Netflix has released original anime programs such as Castlevania and Neo Yokio in the past, these were often American-Japanese co-productions. Even anime shows labeled as “Netflix Originals” were licensed from different Japanese studios. Eden, however, is a wholly-original Netflix property from Qubic Pictures and CGCG studios.

Irie directed all four episodes of the new series, while Ghost in the Shell 2 and Star Wars: The Clone Wars’ Justin Leach handled producing duties. The show’s script was written by Kimiko Ueno, who wrote episodes of Little Witch Academia and Space Dandy.

Eden's new trailer states that the show is slated to premiere on May 27.
Check out the date announcement trailer below.
▶ Watch the Trailer
Posted by anim8trix at 12:00 AM