ZOMBILLENIUM: Theme Park of the Dead! 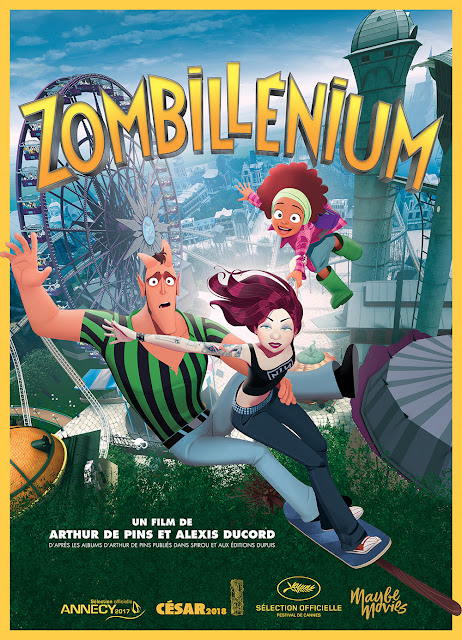 ZOMBILLENIUM
“Zombillénium boasts a rock-solid concept and some of the most appealing character design in recent memory.” -  Variety
“An entertaining, irrepressibly European animated feature grounded in an amusing gothic fantasy concept... Could almost be described as the hippest animated feature involving undead creatures and amusement parks since Scooby-Doo.” - The Hollywood Reporter
Zombillenium (French: Zombillénium) is a 2017 French-Belgian animated film directed by Arthur de Pins and Alexis Ducord, based on the comic series of the same name. It was shown in the Special Screening section at the 2017 Cannes Film Festival.
Zombillenium is an amusement park like no other: only genuine werewolves, vampires, zombies, and other citizens of the undead community are employed there… for eternity. One day, Hector, a young compliance officer, comes to control the park's safety and threatens to shut it down. Francis, the vampire who manages the park, has no choice but to bite him to protect his business. And so Hector is hired. He gets to know his co-workers and Gretchen, a witch who's interning at the park, teaches him the workplace culture. Hector could well be Zombillenium’s last chance: attendance figures are down and the park needs a new special attraction to avoid bankruptcy. But deep down Hector longs for his young daughter, Lucy, who’s waiting for him back in the 'real' world...
▶ Watch the Trailer
▶ ♫ Stand As One ♪
▶ Watch in 360 VR 3D 4K
Posted by anim8trix at 12:00 AM