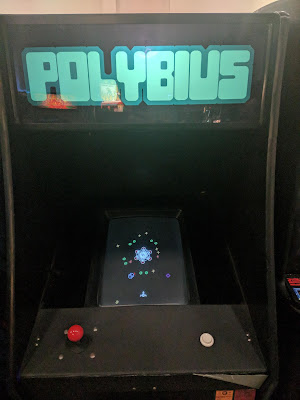 POLYBIUS
The Video Game That Doesn't Exist
Polybius is an urban legend that emerged in early 2000, concerning a fictitious 1980s arcade game. The legend describes the game as part of a government-run crowdsourced psychology experiment based in Portland, Oregon during 1981. Gameplay supposedly produced intense psychoactive and addictive effects in the player. These few publicly staged arcade machines were said to have been visited periodically by men in black for the purpose of data-mining the machines and analyzing these effects. Eventually, all of these Polybius arcade machines allegedly disappeared from the arcade market.

The urban legend has served as inspiration for free and commercial video games by the same name. "Polybius" is also the name of a classical Greek historian born in Arcadia, who is known for his assertion that historians should never report what they cannot verify through interviews with witnesses.

The story tells of an unheard-of new arcade game appearing in several suburbs of Portland, Oregon, in 1981, something of a rarity at the time. The game is described as proving popular to the point of addiction, with lines forming around the machines often resulting in fighting over who would play next. The legend describes how the machines were visited by men in black, who collected unknown data from the machines, allegedly testing responses to the game's psychoactive effects. Players supposedly suffered from a series of unpleasant side effects, including amnesia, insomnia, night terrors and hallucinations. Approximately one month after its supposed release in 1981, Polybius is said to have disappeared without a trace.

The company named in most accounts of the game is Sinneslöschen. The word is described by writer Brian Dunning as "not-quite-idiomatic German" (a word constructed outside the norms of German-language usage and grammar) meaning "sense delete" or "sensory deprivation"; if it were a German term of actual use, "Sinneslöschen" would be pronounced like [zɪnəs'lœ:ʃn̩]. The word's meanings are derived from the German words Sinne, "senses" and löschen, "to extinguish" or "to delete", though the way they are combined is not standard German.

Due to the viral and anecdotal nature of the legend, an exact origin is unclear. Some anecdotal accounts claim that the legend originated on Usenet in 1994, or earlier through offline word of mouth, though no recorded evidence exists for either claim. The earliest confirmed record of the legend is an entry for the title added to arcade game resource coinop.org on February 6, 2000; although Coinop lists the page as originating in 1998, it appears to have defaulted to that time due to a database error caused by a lack of input. The entry mentions the name Polybius and a copyright date of 1981, although no such copyright has ever been registered. The author of the entry claims in the description to be in possession of a ROM image of the game, and to have extracted fragments of text from it, including "1981 Sinneslöschen". The remainder of the information about the game is listed as "unknown", and its "About the game" section describes the "bizarre rumors" that make up the legend.

Some time prior to September 2003, Kurt Koller, the owner of coinop.org (the Web site featuring the earliest known description of the supposed game), submitted a message to the video game magazine GamePro about Polybius. Polybius then appeared in the September 2003 issue of GamePro, as part of a feature story on video games called "Secrets and Lies." This is the first known printed mention of the game, exposing the legend to a mass-market audience. The article declared the existence of the game to be "inconclusive", helping to both spark curiosity and spread the story.

Following the appearance in GamePro magazine, a number of people claimed to have some involvement with Polybius. In 2006, a man named Steven Roach claimed he had been one of its original programmers and that his company developed a game with very intense and cutting-edge graphics. However, according to Roach, a boy experienced an epileptic seizure while playing, and the cabinets were withdrawn by the company in a panic. Although Roach offered no proof for his claims, his story added details on the gameplay, which later inspired Rogue Synapse's game based on the legend.
▶ Watch the Video
Posted by anim8trix at 12:00 AM