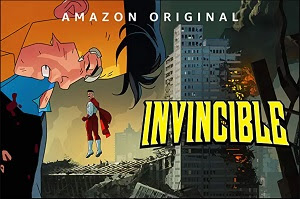 The Comic History of INVINCIBLE
Invincible is an American adult animated superhero streaming television series, based on the comic book character of the same name by Robert Kirkman, which premiered on Amazon Prime Video on March 26, 2021. The series stars Steven Yeun, Sandra Oh, and J. K. Simmons.
▶ Watch the Video
Mark Grayson is a normal teenager, except for the fact that his father, Nolan, is the most powerful superhero on the planet. Shortly after his seventeenth birthday, Mark begins to develop powers of his own and enters into his father's tutelage.
Posted by anim8trix at 12:00 AM