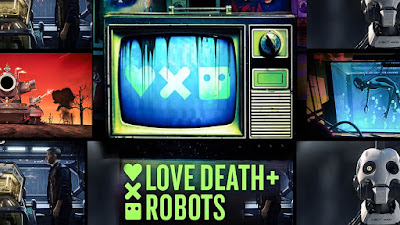 LOVE DEATH + ROBOTS
Returns with VOLUME 2 on May 14th
The animated series consists of stand-alone episodes, all under 17 minutes long, and produced by different casts and crews, though some episodes may share certain crew members. The series title refers to each episode's thematic connection to the three aforementioned subjects, though not every episode contains all three elements. Love Death & Robots is a blast of the future with its roots deep in the past. Show creator Tim Miller teamed up with director David Fincher after years of wanting to make adult animated features and short films at his animation house Blur Studio. When his directorial debut Deadpool hit big, they saw their opportunity and the anthology series found a natural home at Netflix.
▶ Watch the Trailer
Posted by anim8trix at 12:00 AM