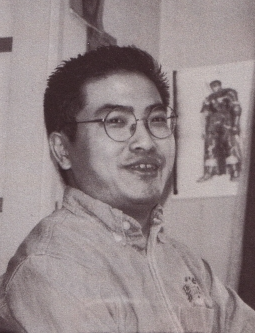 KENTARO MIURA
(July 11, 1966 – May 6, 2021)
Creator of the manga Berserk
Kentaro Miura (三浦 建太郎, Miura Kentarō) was a Japanese manga artist. He was best known for his acclaimed dark fantasy manga Berserk, which began serialization in 1989 and continued until his death. As of 2021, Berserk had more than 50 million copies in circulation, making it one of the best-selling manga series of all time. In 2002, Miura received the Tezuka Osamu Cultural Prize. 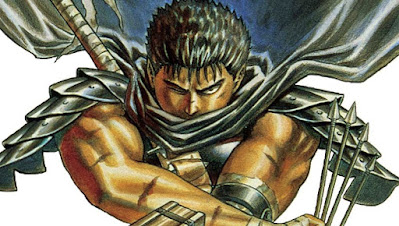 Early life and education
Miura was born in Chiba City, Chiba Prefecture, Japan, in 1966. In 1976, at the early age of 10, he made his first manga, entitled Miuranger, which was published for his classmates in a school publication; the series ended up spanning 40 volumes. In 1977, Miura created his second manga, Ken e no michi (剣への道, The Way to the Sword), in which he used India ink for the first time. When he was in middle school in 1979, Miura's drawing techniques improved greatly as he started using professional drawing techniques.

While in high school in 1982, Miura enrolled in an artistic curriculum, where he and his classmates started publishing their works in school booklets. His first doujinshi was published in a magazine, with the help of friends, in the same year. At age 18, Miura worked as an assistant to George Morikawa, of Hajime no Ippo fame. Morikawa quickly acknowledged Miura's high artistic level and dismissed him, saying there was nothing he could teach that Miura did not already know.

Career
In 1985, Miura applied for the entrance examination to the art college of Nihon University. He submitted his project Futanabi for examination and was granted admission. The project later earned him a nomination as Best New Author in Weekly Shōnen Magazine. Miura's first serialized work, Noa, was published in the magazine, but it was not successful. In 1988, while working for Buronson on a project titled Orō (王狼, lit. "King of Wolves"), Miura published a prototype of Berserk in Hakusensha's Gekkan ComiComi. This 48-page prototype placed second at the 7th ComiComi's Manga-School prize. The full serialization of Berserk, ultimately Miura's most famous and successful work, began in Hakusensha's Monthly Animal House in 1989. In 1990, a prequel to Ōrō entitled Ōrō Den (王狼伝, The Legend of the Wolf King) was published in the magazine. In 1992, Monthly Animal House was renamed Young Animal, where Berserk continued serialization. In the same year, Miura collaborated with Buronson on Japan, also published in Young Animal.

In 1997, Miura supervised the production of a 25-episode anime adaptation of Berserk produced by OLM, Inc., which aired in the same year on NTV. He also supervised the 1999 Dreamcast video game Sword of the Berserk: Guts' Rage. In 2002, Miura received second place in the annual Tezuka Osamu Cultural Prize for the series. Starting in 2006, Berserk went on frequent and often extended hiatuses, alternating between monthly and irregular serialization. As of 2018, the series has been collected in 40 tankōbon volumes, and as of May 2021 it had more than 50 million copies in worldwide circulation, including digital versions. The series also spawned a host of merchandise, both official and fan-made, ranging from statues, action figures to key rings, video games, and a trading card game. Various art books and supplemental materials by Miura based on Berserk were also released.

In 2013, Miura released the short standalone manga Gigantomakhia, released into English-speaking territories as Giganto Maxia by the publisher Dark Horse in 2016. Duranki, a short manga produced by Miura's personal manga studio Studio Gaga, was serialized in Young Animal Zero in 2019. 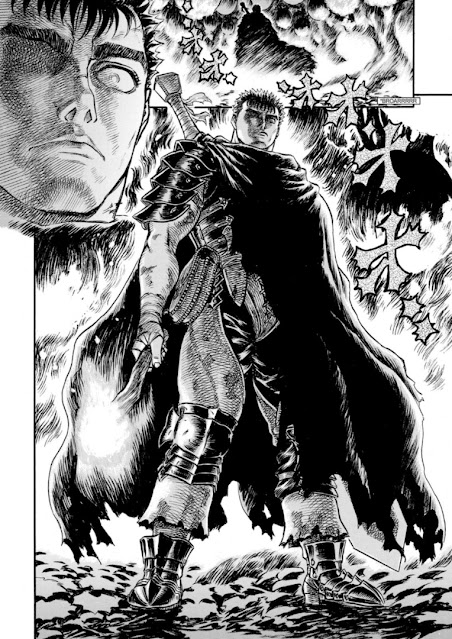 Death
On May 20, 2021, Hakusensha announced that Miura had died on May 6, 2021, due to an acute aortic dissection. A private ceremony was held by his family. Various manga artists offered condolences, including George Morikawa, Hiro Mashima, Rei Hiroe, Hebi-Zou, Ken Akamatsu, Chica Umino, Makoto Yukimura and Atsushi Ohkubo. Susumu Hirasawa, composer for the 1997 television anime adaptation of Berserk, and singer Yoshino Nanjō also offered condolences. Thousands of online players gathered together in Final Fantasy XIV to mourn Miura, with many playing as the Dark Knight class, which itself was heavily inspired by Berserk's protagonist.

Influences
Miura stated that the work that had the biggest impact on his own is the manga series Fist of the North Star (1983 debut). In particular, Miura was influenced by Nagai's manga Violence Jack (1973 debut). Other influences cited by Miura include the Japanese fantasy novel series Guin Saga (1979 debut), Paul Verhoeven films, the Hellraiser series (1987 debut), shōjo manga works, Disney films, and the works of Hieronymous Bosch, M. C. Escher, Gustave Doré and Pieter Bruegel.

Legacy
Established as one of the best-selling manga of all time, Miura's series Berserk impacted the manga medium and beyond, with journalist Jade King stating: "[It] is difficult to overstate the tremendous impact his work has had on the world of games, manga, film, anime, and even literature." The image of Guts and his massive sword is attributed to inspiring characters like Cloud Strife of Final Fantasy VII and Dante from the Devil May Cry series, with the overall aesthetic of Berserk inspiring the monsters and world of the Dark Souls series. 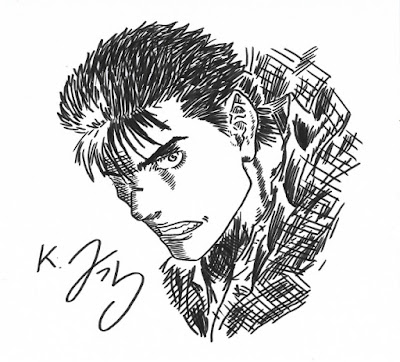