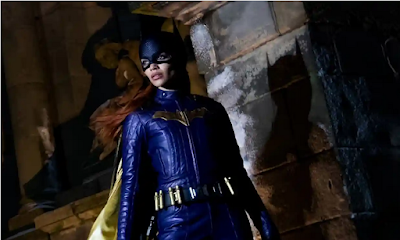 BATGIRL CANCELLED
Warner Bros confirms film starring Leslie Grace as Barbara Gordon,
Michael Keaton, JK Simmons and Brendan Fraser won’t ever be released...
[Source: Guardian] The previously announced Batgirl film starring In the Heights actor Leslie Grace, Michael Keaton and Brendan Fraser will not be released at all, Warner Bros Discovery has unexpectedly announced, despite shooting already being completed and the film being in post-production.

Directed by Ms Marvel directors Adil El Arbi and Bilall Fallah, the film was initially greenlit in 2021 as part of a wider move at Warner Bros to create feature films specifically for the streaming service HBO Max. But the studio confirmed on Tuesday that the film would never get any release, either theatrically or on HBO Max.

Batgirl was to have Keaton reprise his role as Batman, alongside Grace as the titular hero Barbara Gordon, JK Simmons as Barbara’s father, Commissioner Gordon, and Fraser as the villain Firefly.

The Hollywood Reporter said Batgirl’s budget was a factor in the decision, having risen to nearly $90m (£74.1m, A$130m) due to costs relating to it being shot during the Covid-19 pandemic. While the budget is lower than the average DC superhero film, it was reportedly decided that it did not have the “spectacle that audiences have come to expect from DC fare” and would not recoup its losses from being released.

However, the New York Post, which broke the story on Tuesday, cited an unnamed source who said the budget had actually exceeded $100m and that the film had performed so poorly during early test screenings that Warner Bros decided to cut its losses.

“They think an unspeakable Batgirl is going to be irredeemable,” the source told the New York Post. 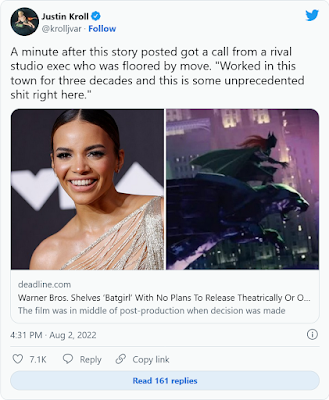 The decision means the film ranks among the most expensive cancelled cinematic projects ever.

The move comes amid a change in leadership since Warner Bros merged with Discovery in May 2021. Warner Bros Discovery CEO David Zaslav, who recently oversaw swingeing cuts at CNN including shutting down its $300m streaming service CNN+ one month after it launched, is reportedly prioritising cost-cutting and refocusing the studio on theatrical films over streaming projects.

Writing in Variety, Adam B Vary and Brent Lang noted that the decision to cancel Batgirl entirely would allow the studio to “take a tax write-down”, citing sources who said it was “seen internally as the most financially sound way to recoup the costs (at least, on an accountant’s ledger)”.
▶ Watch the Video
Several shows including Full Frontal With Samantha Bee, The Last OG and Chad have been cancelled since the Warner Bros Discovery merger, while a DC Comics film of The Wonder Twins that was in development has also been canned.
Posted by anim8trix at 12:00 AM