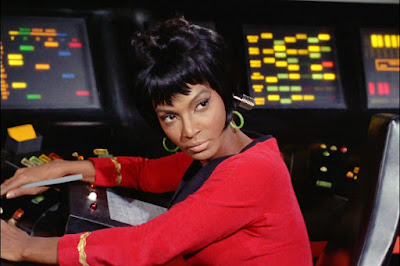 Nichelle Nichols
(December 28, 1932 - July 30, 2022)
Iconic ‘Star Trek’ Actress, Dead at 89
Nichelle Nichols has died. She was 89. The actress became an icon for groundbreaking performances across TV and film as Lieutenant Nyota Uhura on Star Trek: The Original Series, and its film sequels. Nichols' portrayal of Uhura was ground-breaking for African American actresses on American television.  In addition to her prolific career, Nichelle was a devoted civil rights activist. She also became a passionate advocate for NASA as 'Star Trek' became a pop culture phenomenon around the world.
▶ Watch the Video
Posted by anim8trix at 12:00 AM