Chainsaw Man is coming this October! 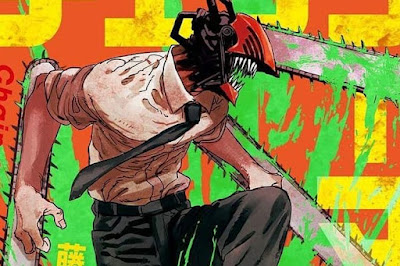 vvvvv C h a i n s a w   M a n vvvvv
The story is set in a world where Devils are born from human fears. Devils are usually dangerous and malevolent, their power proportional to the fear they incite. However, humans can form contracts with them to use their power, and there are individuals specializing in hunting and employing them, called Devil Hunters. Devils originate from Hell, and exist in a cycle between Earth and Hell: they migrate to Earth when killed in Hell, and vice-versa. Dwelling in Hell are extremely powerful Devils called Primal Fears, which have never been killed. Transit between planes appears to be overseen by the Hell Devil.

A Devil may, in certain conditions, inhabit the body of a dead human, gaining some of their memories and personality; such a creature is called a Fiend. Devils who naturally have a humanoid form are said to be benevolent to humans.

The events of the story take place in 1997, in an alternate timeline where the Soviet Union still exists, and many events such as the Holocaust appear to have not occurred. Nuclear weapons once existed in this world, but due to consumption of the Nuclear Weapons Devil by the Chainsaw Devil, Pochita, they have ceased to exist entirely.
▶ Watch the Trailer

The author commented on the trailer saying it was “great because it had a lot of blood”. You already know it’s going to get gruesome as hell. Can’t wait for all the crazy action scenes.