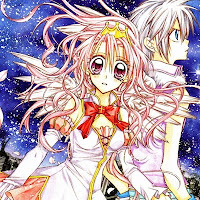 Viz Media got their panel rolling this Saturday morning by starting with a look at their various manga properties that are due out in the next several months and talking about Vampire Knight's anime and streaming that's going as well as the release of the first DVD due out later in July (reviewed here yesterday!). Once they got through that portion of the panel, which ran for about 40 minutes, they started talking about new things that are coming up for the company.
New manga acquisitions:
Mistress Fortune vol 1 by Arina Tanemura in Feb 2011, $9.99
Sakura Hime Kaden, the Legend of Princess Sakura, vol 1, by Arina Tanemura in April 2011, $9.99
Oresama Teacher vol 1 by Izumi Tsubaki in March 2011, $9.99
Ai Ore vol 1 by Mayu Shinjo in May 2011, $9.99
New anime acquisitions:
Nurarihyon no Mago, aka Nura: Rise of the Yokai Clan
This is a new Shonen Jump series that's starting its broadcast in Japan on July 5th and they will be simulcasting it on the same day via their VizAnime site that's powered by Hulu, giving it significant exposure over the summer.
Plot Summary: Rikuo Nura is part human and a quarter Youkai (demon). He lives in a house full of spirits along with his youkai grandfather. Trying to escape his fate of acting like a demon, he does good deeds in order to avoid becoming one, despite his grandfather's wish to succeed him as master of the Nura youkai clan. He eventually comes to terms with his demon blood and decides to take up the position of Young head of the Nura house. Multiple factions aim to stop him or overtake his position, and he must gather friends and allies, a new Hyakki Yaku under his banner of "Fear".
The series is based on the manga by Hiroshi Shiibashi which began its run in Weekly Shonen Jump in March of 2008 and is still ongoing with ten volumes released so far.
There was no formal Q&A session at the panel, but a question was snuck in afterward asking about the Monster series but nothing could be said by the representative about it at this stage.
Posted by anim8trix at 2:00 AM

Email ThisBlogThis!Share to TwitterShare to FacebookShare to Pinterest
Labels: AX