[Source: ScreenRant] DC continues to release more entries in a successful line of animated films. The films showcase everything from adaptations of popular comics like The Dark Knight Returns, to tie-in films like Assault on Arkham (part of the Arkham Asylum video-game franchise), to original stories like the most recent Batman: Bad Blood. Soon DC will release another animated film called Justice League vs. Teen Titans, the first animated film to feature the Teen Titans.

Justice League vs. Teen Titans will be part of DC’s shared animated film universe that began with Justice League: War, and continued with other titles like Throne of Atlantis. These films are loosely based on New 52 continuity, but they do not hold exactly to that continuity. For example, Aquaman is introduced in Throne of Atlantis instead of Justice League: War where he first appeared in the New 52 comics. Despite deviating from the source material, the films have maintained internal continuity, and even introduced new stories like Batman: Bad Blood. Justice League vs. Teen Titans will also be an original story set in this animated DC film universe.

We now have a new teaser trailer for Justice League vs. Teen Titans which you can check out above. The trailer doesn’t show much but it does establish the character line-up for both teams (the Justice League and Teen Titans), as well as the main threat in the film: the demon influences of Trigon, who we see briefly at the very beginning of the trailer. 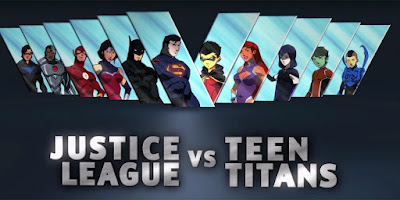 Trigon is one of the most powerful beings in the DC Universe. He is a demon with inter-dimensional origins and has enslaved millions of worlds, killing billions in the process. In a recent casting announcement, we learned that Trigon would be played by Jon Bernthal (The Walking Dead, Daredevil).

In addition to Bernthal, the film introduces Taissa Farmiga (American Horror Story) as the voice of Raven, Jake T. Austin (The Fosters) as Blue Beetle, Brandon Soo Hoo (From Dusk Till Dawn) as Beast Boy, and Kari Wahlgren (Rick and Morty) as Starfire. The Justice League will be voiced by returning actors from past entries in the DC animated film universe, such as Jerry O’ Connell as Superman, Jason O’ Mara as Batman, Rosario Dawson as Wonder Woman, and Christopher Gorham as the Flash. The film will be directed by Sam Liu (Justice League: Gods and Monsters) from a script by Alan Burnett and Bryan Q. Miller.
Justice League vs. Teen Titans will be released sometime in the spring of 2016.
Posted by anim8trix at 12:00 AM