Alan Rickman passes away at age 69 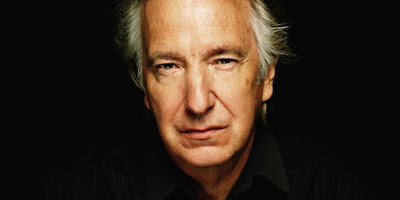 ALAN RICKMAN
(February 21, 1946 – January 14, 2016)
[Source: Wikipedia] Alan Rickman, the versatile actor best known for his iconic roles in Harry Potter and Die Hard, has died at the age of 69. The star was reportedly suffering from cancer. For younger fans, Rickman is likely best known as Severus Snape, the potions master in the smash hit Harry Potter film franchise.

Rickman was born in Acton, London, to a working class family, the son of Margaret Doreen Rose (Bartlett), a housewife, and Bernard Rickman, a factory worker. His ancestry was English, Irish and Welsh; his father was Catholic and his mother a Methodist. His family included an older brother, David (b. 1944), a graphic designer; a younger brother, Michael (b. 1947), a tennis coach; and a younger sister, Sheila (b. 1950). Rickman attended Derwentwater Primary School in Acton, a school that followed the Montessori method of education.

When he was eight years old, Rickman's father died, leaving his mother to raise him and his three siblings mostly alone. She married again, but divorced his stepfather after three years. "There was one love in her life", Rickman later said of her. He excelled at calligraphy and watercolour painting. From Derwentwater Junior School he won a scholarship to Latymer Upper School in London, where he became involved in drama. After leaving Latymer, he attended Chelsea College of Art and Design and then the Royal College of Art. This education allowed him to work as a graphic designer for the Notting Hill Herald, which Rickman considered a more stable occupation than acting. "Drama school wasn't considered the sensible thing to do at 18".

After graduation, Rickman and several friends opened a graphic design studio called Graphiti, but after three years of successful business, he decided that if he was going to pursue acting professionally, it was now or never. He wrote to request an audition with the Royal Academy of Dramatic Art (RADA), which he attended from 1972–74. While there, he studied Shakespeare and supported himself by working as a dresser for Sir Nigel Hawthorne and Sir Ralph Richardson.

His role as Hans Gruber in Die Hard earned him a spot on the AFI's 100 Years...100 Heroes & Villains list as the 46th best villain in film history, though he revealed he almost did not take the role as he did not think Die Hard was the kind of film he wanted to make. His performance as the Sheriff of Nottingham in Robin Hood: Prince of Thieves also earned him praise as one of the best actors to portray a villain in films.

Rickman took issue with being typecast as a "villain actor", citing the fact that he had not portrayed a stock villain character since the Sheriff of Nottingham in 1991 His portrayal of Severus Snape, the potions master in the Harry Potter series (2001–11), was dark, but the character's motivations were not clear early on. During his career Rickman played comedic roles, including as Sir Alexander Dane/Dr. Lazarus in the science fiction parody Galaxy Quest (1999), portraying the angel Metatron, the voice of God, in Dogma (also 1999), appearing as Emma Thompson's foolish husband Harry in the British Christmas-themed romantic comedy Love Actually (2003), providing the voice of Marvin the Paranoid Android in The Hitchhiker's Guide to the Galaxy (2005), and the egotistical, Nobel Prize-winning father in Nobel Son (2007).

In 1965, at the age of 19, Rickman met 18-year-old Rima Horton, who became his first girlfriend and would later be a Labour Party councillor on the Kensington and Chelsea London Borough Council (1986–2006) and an economics lecturer at the nearby Kingston University] They lived together from 1977 until his death. In 2015, Rickman confirmed that they had married in a private ceremony in New York City in 2012.

Shortly after his passing, his peers in Hollywood took to social media to express their condolences.

Among them was Harry Potter star Daniel Radcliffe, who wrote:


Alan Rickman is undoubtedly one of the greatest actors I will ever work with. He is also, one of the loyalest and most supportive people I've ever met in the film industry. He was so encouraging of me both on set and in the years post-Potter. I'm pretty sure he came and saw everything I ever did on stage both in London and New York. He didn't have to do that. I know other people who've been friends with him for much much longer than I have and they all say "if you call Alan, it doesn't matter where in the world he is or how busy he is with what he's doing, he'll get back to you within a day".

People create perceptions of actors based on the parts they played so it might surprise some people to learn that contrary to some of the sterner(or downright scary) characters he played, Alan was extremely kind, generous, self-deprecating and funny. And certain things obviously became even funnier when delivered in his unmistakable double-bass.

As an actor he was one of the first of the adults on Potter to treat me like a peer rather than a child. Working with him at such a formative age was incredibly important and I will carry the lessons he taught me for the rest of my life and career. Film sets and theatre stages are all far poorer for the loss of this great actor and man.﻿