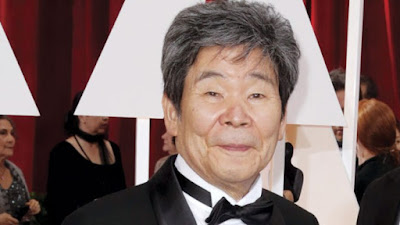 Ghibli's Isao Takahata to Receive
Annie Awards' Lifetime
Achievement Award
[Source: Variety] Though you’d be hard-pressed to get him to admit it, Japanese animator Isao Takahata is one of the most influential artists in the medium, alongside his longtime collaborator and Studio Ghibli co-founder Hayao Miyazaki. His career reached a pinnacle last year when his film “The Tale of the Princess Kaguya” was nominated for an animated feature Oscar. Takahata, 80, will be honored at the Annie Awards on Saturday, Feb. 6, with the Winsor McCay Award for lifetime achievement alongside Phil Roman and the late Joe Ranft.
SEE MORE: Awards: The Contenders
This story first appeared in the February 03, 2016 issue of Variety. Subscribe today.

In your long career, what have been your biggest joys and biggest challenges?
Both my biggest joys and biggest challenges relate to the first feature-length theatrical film I directed: “Little Norse Prince Valiant” (1968). This project was extremely challenging in terms of the content to be expressed and the imagery in order to represent the story. And, for me as a novice director as well as for the young staff that included Hayao Miyazaki, this work was a major challenge. Toei Animation, a company that had been making entertainment animation for children, should have aimed this film toward high school and university students and young adults, those who had not been interested in animation films. But the company made no efforts to do so. They treated it in their normal fashion as a film for children. Due to this, the film, which was difficult to understand for young children, did not do well at the box office. And I was demoted to assistant director for a while.
However, as the years passed, appreciation for this film steadily rose. It was regarded to be a pioneer in animation films aimed at adults, gaining the status of a radical departure for Toei Animation Co. The innovative expression of imagery in the work was highly regarded, and became a major influence on Japan’s animation films. This was the greatest joy for me and for the entire staff who had unstintingly poured their talents into the project. Thirty-eight years after its release, the nearly hundred staff members who worked on the film all gathered at Hayao Miyazaki’s atelier for a celebration. We rejoiced together, as we recalled those trying but happy days.

What changes in animation have you seen that most delight you? What has distressed you?
What has both delighted and distressed me has been the advance in computers. With advances in computers it has become possible to do things that we couldn’t do before. And this will no doubt continue in the future. Without computers, we could not have depicted the kind of expressions we were able to in “The Tale of the Princess Kaguya.” This is a wonderful advance and, for me, something to delight in. And yet, due to the advance in computers, there is a tendency to overly rely on them. This has led to diminishment in various modes of expression. This is most distressing for me.

Studio Ghibli has released some of the world’s best animated films. What do you think was the key to the studio’s great success?
Studio Ghibli was formed relying on the genius of Hayao Miyazaki to allow him to freely create his films. The first key to its success is that Hayao Miyazaki was indeed a genius. His creativity was realized in an exceedingly concrete form, and as his expression goes beyond abstraction. The imagery of his works appeal to a mass audience and is able to be enjoyed by all. He is careful not to ignore the commercial and entertainment aspects of his works. Moreover, at his side is the astonishingly talented producer Toshio Suzuki, who is so adept at indicating how to enjoy each of Miyazaki’s works by pulling in audiences through his brilliant promotion efforts. Unfortunately, I’m not a genius like Miyazaki, but Studio Ghibli has valued my directorial works and has treated them in the same way.

Talk about your long association the Hayao Miyazaki. How do you think your friendship has informed each other’s work?
We became “comrades” connected through our demanding work when we were young as we cooperated with each other in the creation of a new form of animation film.
We shared our conviction in the need to create a world of reality and realistic depictions in all our works. This is natural for works with few fantastic features, but absolutely necessary for people to believe in fantastic stories as well. The big leap into what cannot occur in reality succeeds only when made from the firm springboard of reality.
The fantastic features gradually disappeared from my works, while Miyazaki’s works became more infused with the fantastical. Despite this, we continued to share the idea concerning the realistic depictions in our construction of the imagery of the world, its natural phenomena, and the characters who move about in that world.
Because Hayao Miyazaki’s various films were so alluring, I thought I would realize in my animation films a different appeal and a different expression from what was in his works. In that regard, I suppose you could say I have been greatly influenced by his work.
We also share our attitudes toward our love for the nature immediately around us and our political beliefs of anti-nuclear weaponry and anti-nuclear power and opposition to changing Article 9 of Japan’s Constitution. [Article 9 renounces war and capacity for war by Japan]

Your acclaimed film, “Omohide Poro Poro,” was released in Japan in 1991, but it’s only just now coming to English-speaking audiences in the U.S. as “Only Yesterday.” How do you think your style changed since the film first came out?
If I understand correctly what you mean by style, the pictorial style in my works has gone through many changes. I consider myself to have taken advantage of the fact that I cannot draw. For many years I have wanted to improve on the simplistic flat-plane image of cel animation. But I didn’t want to solve this by going into the 3D-CG method of three-dimensionality and substantiality. I wanted to solve this by a method of “reduction” of not drawing everything on the screen, in order to stimulate people’s imagination and raise the level of artistry. My assertion was that this method is what can and should be applied in Japan, following on our long painting tradition from the 12th century Scrolls of Frolicking Animals, ink paintings, and ukiyo-e woodblock prints all the way to manga. This was realized later in “My Neighbors the Yamadas” (1999) and “The Tale of the Princess Kaguya” (2013), but actually, I had taken to putting this into practice somewhat by leaving areas of the frames blank in the recollection scenes in Only Yesterday.

“The Tale of the Princess Kaguya” (Kaguya-hime no Monogatari) was said to be your last film. Is that the case? Do you think you might be inspired with another story?
I have several projects that I still have in mind that I am currently working on to get closer to realizing. Whether those will be finalized as films is something that no one, myself included, can know.
Posted by anim8trix at 12:00 AM