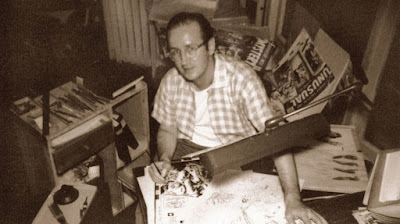 STEVE DITKO
(November 2, 1927 – c. June 29, 2018)
[Source: Syfy] Steve Ditko, the visionary comics artist and writer who co-created, with Stan Lee, the characters of Spider-Man and Doctor Strange, has reportedly died at the age of 90.
Reports of Ditko's death began surfacing Friday night (June 29) on social media, and now the New York Police Department confirms (per The Hollywood Reporter) that Ditko was found dead in his apartment that day, and that he was believed to have died two days prior (June 27). Ditko leaves behind no known survivors.

The extremely reclusive artist, who was still said to work in a midtown Manhattan studio as of 2016, did not give an interview or make a public appearance in more than five decades. His contributions to comics and pop culture, however, cannot be understated. Launching his career in 1953, Ditko got a job two years later at Marvel Comics precursor Atlas. In 1962, editor Stan Lee began developing a teen superhero and, after initially working with Jack Kirby, turned to Ditko.

Spider-Man debuted in Amazing Fantasy #15 (August 1962), with Lee and Ditko's initial 38-issue run setting Peter Parker on the path to become one of the world's three most popular superheroes (alongside Batman and Superman). A year later, in Strange Tales #110 (July 1963), they introduced Doctor Strange, the master of the mystic arts.

Ditko continued to work at Marvel, DC, Charlton, and other publishers before leaving mainstream comics in 1998, creating or co-creating characters like Squirrel Girl, the Question, the Creeper, and many more. While remaining on the fringes of the industry until his passing, Ditko and his sumptuous, instantly recognizable artwork influenced it in ways that will never be forgotten.
Posted by anim8trix at 12:00 AM