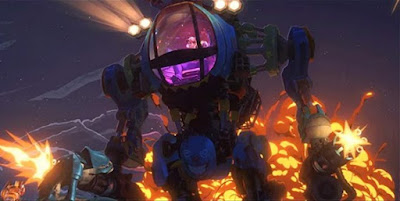 Love, Death, and Robots (Ep #4: SUITS)
A small community of farmers pilot mech suits to defend their land from an invading swarm of insectoids which they call "DeeBees". When the defense field fails, DeeBees pour in faster than they can be repelled, so as the community heads for underground shelters. All arms are called in and one neighbor, Jake, sacrifices himself to kill a large portion of the swarm. A giant insectoid breaks through, but with a well aimed shot from a turret gun, one of the farmers' wives destroy it. Come dawn, the barriers are back to normal and the town has returned to a sense of safety. After the battle, the camera view moves back to show that the whole planet is populated by DeeBees, and the farmers are the invading force, having set up colonies across the planet.