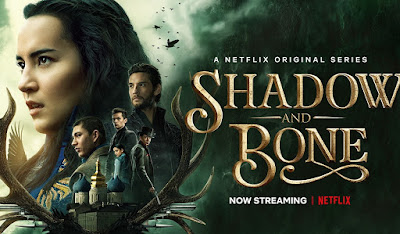 Shadow and Bone
There are no others like her. And there never will be. Get ready to enter the Grishaverse. Shadow & Bone now available only on Netflix.

Ravka, a fantasy kingdom based on the Tsarist Russian Empire, is set in a war-torn world plagued by the Shadow Fold, a swath of permanent darkness separating East from West Ravka which is inhabited by carnivorous winged creatures known as Volcra. Orphan mapmaker Alina Starkov discovers that she is a Grisha (a magic-user) who possesses the power to create light, which could be the key to setting her country free from the Fold. Alina joins an elite army of Grisha serving under General Kirigan, the Shadow Summoner.
▶ Watch the Trailer
But as she struggles to hone her power, she finds that allies and enemies can be one and the same and that nothing in this lavish world is what it seems. There are dangerous forces at play, including a crew of charismatic criminals, and it will take more than magic to survive.
Posted by anim8trix at 12:00 AM