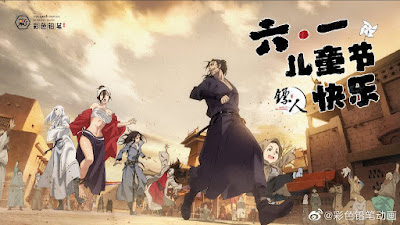 BLADES OF THE GUARDIANS
"Hyoujin: BLADES OF THE GUARDIANS," based on a popular
historical martial arts manhwa created by Xianzhe Xu.
Blades of the Guardians is set in the period of transition between the Sui dynasty and the Tang Dynasty, the latter of which dated from 618 to 907 AD. The series follows the warrior protagonist, Dāomǎ a highly skilled mercenary with a strong sense of honor who travels across Ancient China and makes a living by his sword. One day, Dāomǎ accepts a paid escort mission that will take him to the capital city of Chang'an. However, this mission turns out to be way more than he bargained for. The plot of this series not only includes political intrigues and an oppressive despotic government but also some supernatural elements like man-eating demons.
▶ Watch the Trailer
Scheduled for a release in 2023.
Posted by anim8trix at 12:00 AM