Gather around, my children, and listen! 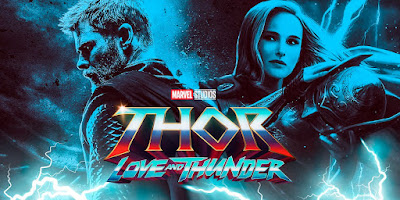 THOR: LOVE and THUNDER
“Let me tell you the story of the space viking, Thor Odinson…”
Thor (Chris Hemsworth) is on a quest for inner peace, but his retirement is interrupted by a galactic killer known as Gorr the God Butcher, who seeks the extinction of the gods. To help him combat the threat, Thor receives help from his ex-girlfriend Jane Foster (Natalie Portman). Together, they embark upon a cosmic adventure to uncover the mystery of the God Butcher's vengeance and stop him before it's too late.
▶ Watch "Thor: Love and Thunder" Trailer
Witness it only in theaters July 8.
Posted by anim8trix at 12:00 AM