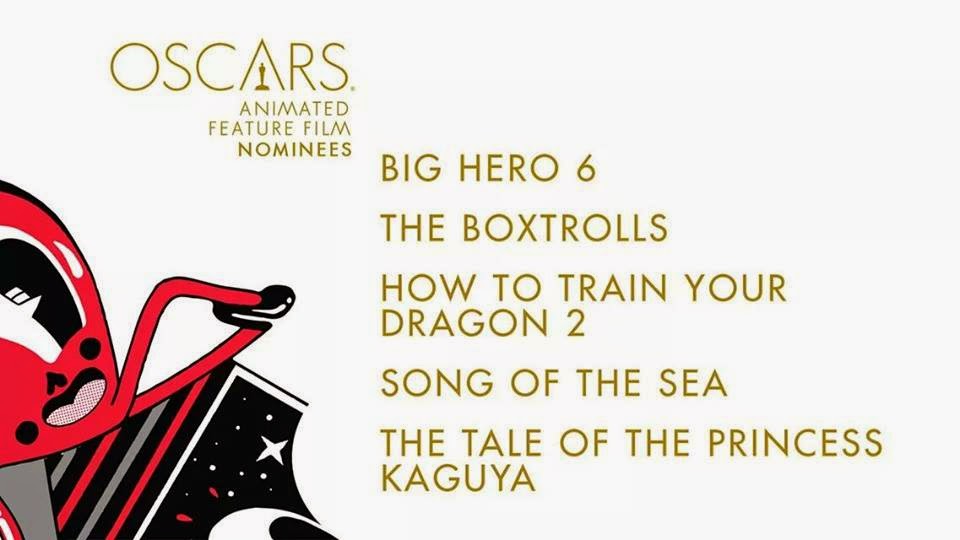 Which Animated Feature Film
Do You Think Will Win?
[Source: LA Times] The Academy of Motion Picture Arts and Sciences nominated "Big Hero 6," "The Boxtrolls," "How to Train Your Dragon 2," "The Tale of The Princess Kaguya" and "Song of the Sea" for best animated feature, a diverse list of films which nevertheless omits a popular favorite, "The Lego Movie."

In a year with no film from frequent contender Pixar Animation and some very strong movies from industry outsiders and newcomers, the category reflects the tastes of the academy's animation nominating committee, a group that tends to select films with an eye toward the roots of the craft in stop-motion and hand-drawn techniques.

"The Lego Movie," the first film from the newly rebooted feature animation division at Warner Bros., is the highest grossing animated movie of the year, having collected $257.8 million domestically, and it's among the best reviewed, with a 96% fresh rating on Rotten Tomatoes. 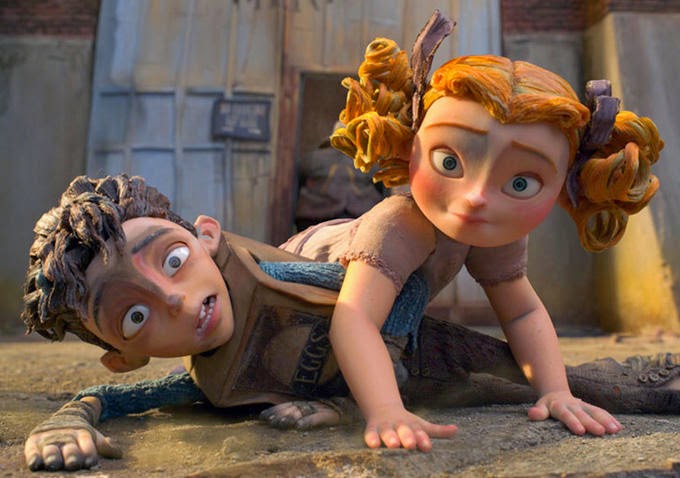 "In previous years there’s been an obvious front-runner in the animation race," said Eric Beckman, president of GKIDS, the tiny New York-based distributor of Japan's Studio Ghibli movie "Princess Kaguya" and Ireland's Cartoon Saloon film "Song of the Sea." "Without 'Lego' in the race, I'm at a loss as to who that is."

The animation nominating committee, which is composed of both members from the animation branch and from other branches, selected two computer-animated movies at large studios -- Disney's "Big Hero 6" and DreamWorks Animation's "How to Train Your Dragon 2" -- and three smaller films made with the industry's oldest techniques, Laika's stop-motion "The Boxtrolls" and GKIDS' two hand-drawn films.

"We’re in a time where the CG film is the main expression of animation these days, and in a weird way, the old stands out as new," said Graham Annable, who directed "The Boxtrolls" with Anthony Stacchi.

The branch may have stumbled on "The Lego Movie's" genesis as a film about a toy brand, or on its mostly CG animation, which was produced by Animal Logic Studios in Australia.

"It's less about box office or popularity or visibility," said "How to Train Your Dragon 2" director Dean DeBlois. "The nominating committee are absolute lovers of animation. They get together and carefully watch each film."

The animation world is a small and tightknit one -- Chris Williams, who directed "Big Hero 6" with Don Hall, was recently in DeBlois' wedding -- but it's been growing rapidly, which may have also affected "The Lego Movie's" prospects.

"The Lego guys are so insanely talented," Williams said. "I was saddened to see that. But it’s one of those years where there's so many great animated films. Pixar and [Disney and Pixar chief creative officer] John Lasseter have been really important as far as raising the bar and pushing what an animated movie can be, and a lot of other studios have answered that call and raised their game. I see an industry that is so strong right now."

"The Lego Movie" did earn one nomination, for its original song, "Everything is Awesome" by Shawn Patterson. But its filmmakers, Chris Miller and Phil Lord, expressed their disappointment on Twitter about their omission from the animation category.