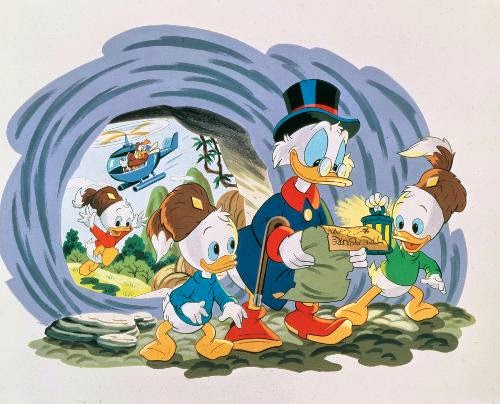 D U C K   T A L E S
[Source: Yahoo!News] DuckTales hasn’t been on the air in 25 years, but passion for the show lives on. From blogs rewatching the show to remasters of the video game, a slow jam version of the theme song, and even a remake of the title sequence with real ducks (which drew more than 6 million hits on YouTube), it’s almost like the show is still on the air.

Disney has just announced that come 2017, it actually will be on the air — via an all-new reboot on Disney XD. Scrooge McDuck will be back along with Donald Duck and his nephews, Huey, Dewey, and Louie. Also returning will be many of the best-remembered citizens of Duckburg: Duckworth, Gyro Gearloose, Launchpad McQuack, Flintheart Glomgold, the nefarious Magica DeSpell & Poe, Mrs. Beakley, Webbigail Vanderquack, and Ma Beagle & the Beagle Boys.

The original series was based on – and several of the episodes were taken directly from – the comics written by Carl Barks. No word on whether the show will retell any of those stories or they’ll be all new, but in a statement Mark Buhaj, Disney XD’s General Manager, promises the new series “will bring that same energy and adventurous spirit to a new generation.”

If you’re sitting there right now and can’t get the song out of your head (Woo-ooo!), there’s an app for that: WATCH Disney Channel has episodes available to stream while you wait for 2017.
Posted by anim8trix at 12:00 AM