STAR WARS: TIE FIGHTER
[Source: TheVerge] Paul Johnson's seven-minute TIE Fighter is a dialogue-free short movie that details a dogfight in space between Star Wars' Imperial and Rebel forces. Influenced by the 1994 PC game of the same name and put together by Johnson over the course of four years, the film is action-packed, beautifully drawn, smoothly animated, and — most importantly — impressively accurate to Star Wars' fiction.


The short starts with an Imperial probe droid, warbling its familiar refrain as it spots a small Rebel fleet loitering near an asteroid field (sound, as science has proven, carries in Star Wars' space). The probe's discovery summons a fearsome fleet: several Star Destroyers and a ship that looks like a particularly tubby cousin of the iconic triangular spacecraft. That bulbous ship is no Star Destroyer — it's an Immobilizer 418 Interdictor-class cruiser, and its four bulges are filled with gravity well generators that, when activated, stop nearby ships from jumping to hyperspace. The Rebels aren't attacking it because it's a fair fight. They're attacking it because they need to get away. 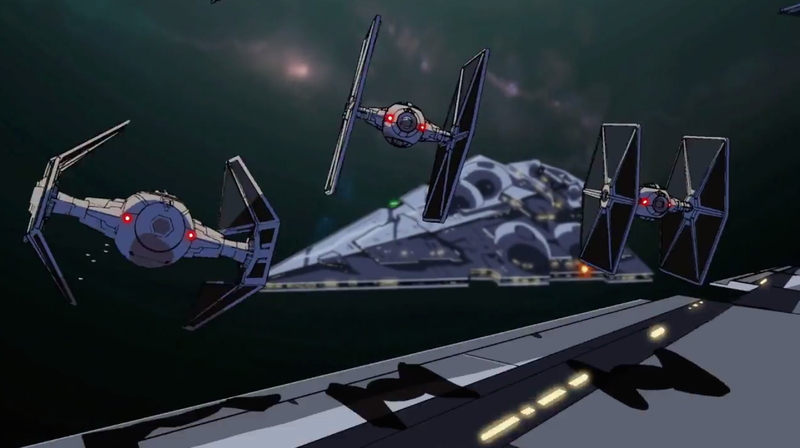 The ambushed fleet beats the Empire's in capital ship numbers, but the bigger Rebel craft have no hope against the Star Destroyers' turbolasers. Two Corellian Corvettes — the same ship swallowed up by the Star Destroyer at the beginning of Episode IV — are only there to guard against frigate-sized craft, and the shellfish-shaped transports are only good for carrying troops. The biggest ship on offer is a Nebulon-B frigate, a ship known best for its role as a hospital ship at the battle of Endor and its glaring structural weakness at its mid-point.

Where X- and Y-Wing starfighters are blessed with shields, life support systems, and hyperdrives, the majority of Sienar's TIE craft aren't. X-Wings can jump through hyperspace in formation with their escort charges; TIE fighters have to be scooped up and dumped out at each stop like laser-equipped ducklings. As Johnson's film shows, the Rebel fighters are tougher, able to take a number of laser salvos and shrug them off thanks to their shield. But TIE craft are both more nimble and more numerous, cheap to replace and maintain, their pilot chairs easily filled with fresh recruits. 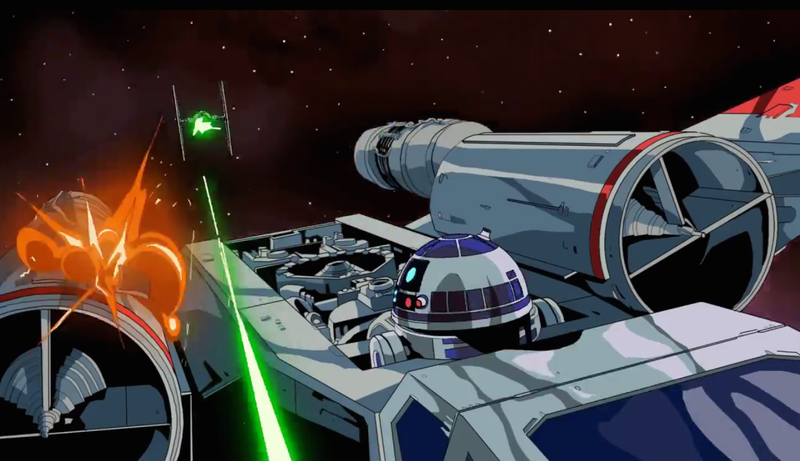 Even the less (fictionally) plausible events in Johnson's film are explainable in Star Wars' lore. The Interdictor-class vessel is presumably able to deflect incoming torpedoes by manipulating its gravity well generators. The TIE bomber — traditionally a sluggish sitting duck of a target — is able to deploy missiles to knock off half a squadron of Rebel fighters in one strike because its pilot, as explained in the short's accompanying materials, has developed her own advanced armaments. This devotion to canon makes the film, already enjoyable for its explosions and excellently '80s hair metal soundtrack, even more satisfying.

We're used to seeing the Rebels win, but the desperate group in Johnson's film are outnumbered, outgunned, and out of time. Unable to break through a screen of screen of chaff to knock the Interdictor down, the small fleet is easy prey to TIE Fighter's anime-ified Empire — a slick and delightfully accurate Star Wars-themed game of "who would win in a fight between..."
Posted by anim8trix at 12:00 AM