PlayStation's  P O W E R S
Powers is an American online streaming series adaptation of the Powers comic book series published by Marvel Comics under their Icon Comics imprint. The PlayStation Network's first scripted original programming, the series premiered on March 10, 2015. The first two episodes of the series were written by Charlie Huston and directed by David Slade. The first three episodes were released on March 10, 2015 on the PlayStation Network. The pilot episode is available for free on YouTube and Crackle.

E P I S O D E   O N E
In a world in which superpowered individuals known as "Powers" are a reality, the city of Los Angeles has a special department known as the Powers Division which polices superpowered criminals. Christian Walker, a Power known as "Diamond" has lost his powers and becomes a detective in the Powers Division. Following a routine arrest, a Power breaks free from his cell and kills Walker's partner. After the mess from the jailbreak is cleaned up, Walker is assigned a new partner, Deena Pilgrim. For their first case, they are assigned to investigate the death of the superhero Olympia, found dead in a hotel room by a young girl named Calista Secor. Walker and Pilgrim interrogate Calista, but before they can gain any real information, she is teleported out of the police station by Johnny Royale, a criminal Power thought killed many years ago. Walker and Pilgrim go to visit Walker's old friend "Big Bad" Wolfe who had been caught and incarcerated by Walker after becoming a criminal. Wolfe was thought to have killed Johnny Royale, but a conversation with Wolfe yields no new information, save for him cryptically telling Walker that he will give him back his powers if he will let him out of prison. Walker is able to track down Calista, but finds her about to leap from a building in a desperate attempt to activate powers that she hopes she has. When she jumps, Walker jumps after her, hoping that his powers will return and allow him to save her. The attempt fails, but before they hit the ground, the superhero RetroGirl saves them both. 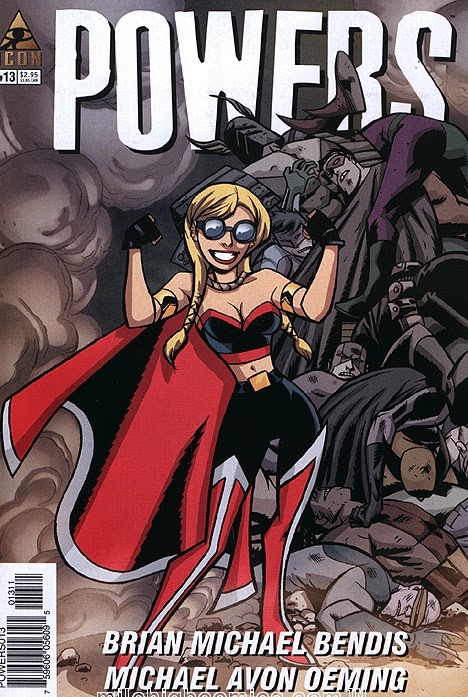