Mondo's 'The Thing' board game 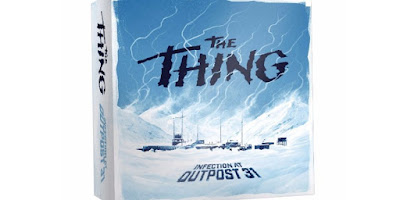 "THE THING" Board Game
[Source: blastr] If anyone loves anything having to do with John Carpenter's The Thing, it's ME!! This was one of the most influential films of my life as an impressionable, nerdy teen growing up in California when it struck theaters in 1982, ranking right after Ridley Scott's Alien. So I'm giddy to reveal the first look inside the chilly new board game based on the classic film.

With its 35th anniversary hitting in June, The Thing is being celebrated as Carpenter's true masterpiece, far closer in execution to the source material -- John W. Campbell's 1938 novella, Who Goes There? -- than the 1951 Howard Hawks-produced film. As such, Mondo announced this project in February, but now we have box art and a board! 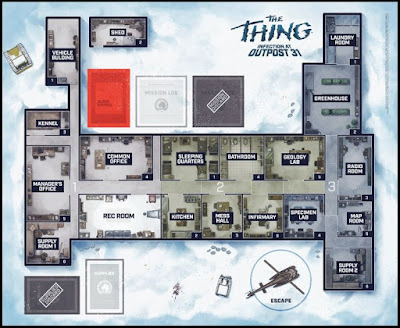 The Thing: Infection At Outpost 31 is being released by Mondo in conjunction with USAopoly. If you think about it for a moment, the sci-fi horror yarn makes for a perfect setting and plotline in a Clue-like, hidden-identity tabletop game. The standard version of the nightmarish novelty will be in stores and available online this October, and a special, limited-edition Mondo prestige version will be sold at MondoTees.com.

An alien lifeform has infiltrated a bleak and desolate Antarctic research station assimilating other organisms and then imitating them. In the hidden identity game THE THING ™ INFECTION AT OUTPOST 31, you will relive John Carpenter’s sci-fi cult classic in a race to discover who among the team has been infected by this heinous lifeform. The game has been designed to be as authentically cinematic as possible, ensuring that the players will experience the paranoia and tension that makes the film so great.

"Mondo brought more than their storied design acumen to the table," said Joe Van Wetering, Creative Design and Game Development at Project Raygun. "Thanks to their deep understanding and reverence for THE THING, they helped define the tone and shape the game play itself. INFECTION AT OUTPOST 31 reflects a true collaboration between our two brands resulting in a game that will excite tabletop and film aficionados alike."

The regular version of the game features artwork and designs by Justin Erickson of Phantom City Creative. The Mondo exclusive version, sold exclusively through MondoTees.com, is limited to 1,982 copies, and features different packaging artwork by Jock. The limited edition game will also come with a Mondo print, enamel pin and two additional sculpted movers: the Norwegian character and the Palmer Thing.

Commenting on the design, artist Justin Erickson said, "with THE THING box art, I wanted to focus on the isolation of Outpost 31 and hint at the hidden alien dangers that lurk around every corner. The title of the game cut out of the ice/snow is a call back to the Thing originally being cut out of the ice by the Norwegians." 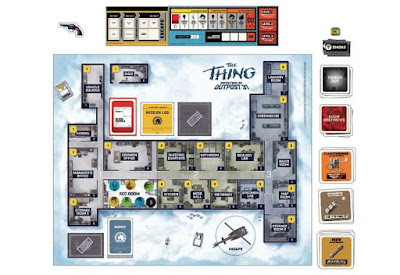