Moviegoers are getting into "It" 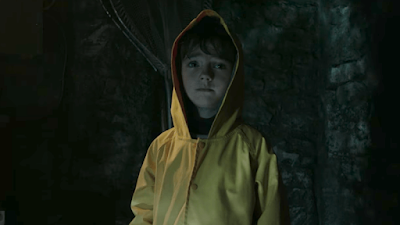 Some Are Very Committed to Making 'It'
Screenings as Creepy as Possible
[Source: Gizmodo] The new It reboot has been filling seats and breaking box office records, nabbing the biggest opening weekend for a horror film. And as you might expect, people are getting really into it. For example, several Alamo Drafthouse theaters held “Clowns Only” screenings (surprisingly not pissing off the same guys who freaked out over the Wonder Woman version). Then, of course, you’ve got fans eager to out-freak each other out.

At the Alamo Drafthouse in Phoenix, Jackson Robert Scott (who plays Georgie Denbrough) got into character when stopping by for a screening of It. The theater nabbed a few photos of Scott eerily chilling in the empty theater, balloons and all, presumably before a bunch of moviegoers shit their collective pants at the sight of Georgie himself warning them they’d soon be floating too.

As terrifying as it might be to share a theater with the kid who’s simultaneously screaming nightmares in your face onscreen, it’s nothing compared to one man’s harrowing experience in England, where he was greeted by the very thing that will take over your nightmares this evening. You’re welcome. 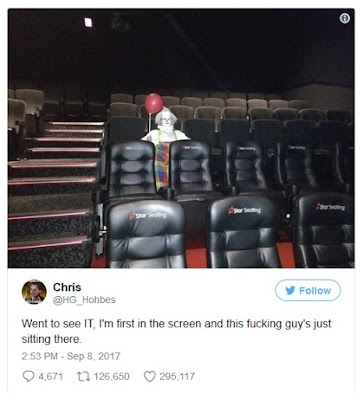 He struck up a conversation with the Dead Clown Walking and, according to his Twitter, it turns out “he’s actually all right.” Later on, a woman named Hannah took credit for the stunt, saying she’d done the guy’s makeup the day prior.

Let us know in the comments if you’ve had any creepy sightings when you’ve gone to see It in theaters. If you haven’t seen It yet, consider yourself warned. 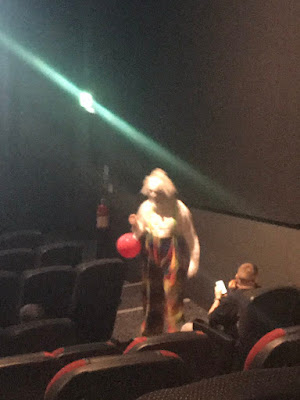