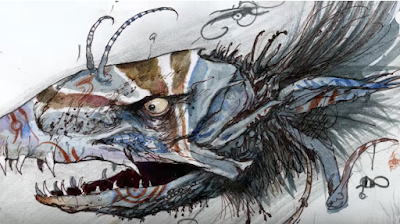 Design Your Own Creature
for the New Dark Crystal Series
[Source: Syfy] The Jim Henson Company is holding a contest to find the right design for a small, woodland creature.
If you ever thought, “Gee, I’d love to build a Muppet-like creature, but I have neither the time nor the talent,” today is a good day to be you.

The Jim Henson Company, creators of beloved films and TV series such as Sesame Street, Labyrinth, and Farscape, is making a Netflix series based on its 1982 movie The Dark Crystal. Known as The Dark Crystal: Age of Resistance, it will be a prequel about the world of Thra and its many creatures, lovely and otherwise.

Potential designers can submit a new creation to The Jim Henson Company. The winner—who may or may not be chosen by Brian Froud, conceptual designer of The Dark Crystal—gets $500. Better yet, your concept will be built by Jim Henson’s Creature Shop. And they ain’t promisin’ nothin’, but there’s a good chance your character will make an appearance in the show.

Details include:
This small, woodland creature must be a brand new concept – it cannot be a variation of an existing species, e.g., Skeksis, Mystic, Podling. All ideas are welcome, as long as they feel true to the world of The Dark Crystal, without being a variation of an existing Brian Froud drawing. Please include at least a front and side view of your new creature. In addition, please provide a paragraph of 50–100 words about your new creature, including a name, brief back story and characteristics of the creature.

So if your scribbles and sketches include fantastical furry critters, you have until November 22 to polish them up and enter.

Remember, you have a chance to have your design built by the same people who make Muppets. And Farscape's Rygel. It’s not just a good day to be you: It’s a great day.

Click here for the details.
Posted by anim8trix at 12:00 AM