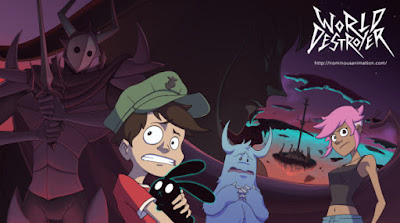 World Destroyer is a 2D animated film made by Nominous Animation. Through funds raised on Indiegogo we hope to finish the rest of the film.

World Destroyer is a tale of two siblings living in the aftermath of their parents’ separation. Enrique is shy and passive, but can be pushed out of his comfort zone by his eclectic and rebellious sister Nadine.

The kids are introduced to a half-formed planet named Nor when a mysterious rabbit-like creature pays them a visit. Following not too far behind is Prince Exoxeneph of Nor, leader of a race of humans called the Ipheris. It seems the Ipheris have known about Earth’s existence long beforehand and are already preparing for its conquest.

Our movie will be entirely funded by backers, fans, and grants. How much of the film that gets completed is contingent on the amount of funds raised. We are asking for $300,000 USD so that we can work on the film full-time and hire help for animation production, the heaviest and most labor-intensive part of the movie.
SUPPORT THE FILM!
Posted by anim8trix at 12:00 AM