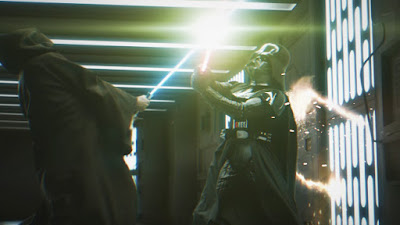 ‘Star Wars’ Fans Recreated The Obi-Wan Vs. Darth Vader Duel From ‘A New Hope’ With Impressive Results
[Source: Uproxx] The fateful duel between Darth Vader and Obi-Wan Kenobi in Star Wars: A New Hope has taken some flack from fans in recent years for its relatively clunky and slow action. Fair or not, that’s just how it is. Of course, we know that Sir Alec Guinness, who was 63-years-old when filming, wasn’t able to perform in a fast-paced duel, and the special effects of the time couldn’t allow for more than a few clashes of a lightsaber. It was 40 years ago, and it was great for what it was, but the prequels showed that the Jedi are infatuated with running, jumping, and flipping in their lightsaber duels, so what’s the deal with the pokiness of it all?


Some of these questions can be translated into fans trying to make their own personal retcon for the technical issues of 1977 into an explanation for why one of the most important duels in Star Wars history is also one of the most underwhelming for some. Maybe it helps them sleep at night. But some of the fans that still lay in bed staring at the ceiling are highly-trained in the ways of computer-generated effects, and have taken it upon themselves to recreate the duel.


FXItInPost is hard at work remaking the entire, second battle between Obi-Wan Kenobi and his former apprentice, but for now, they have made a short teaser at what a more impressive and physical duel between Vader (the Vader we see at the end of Rogue One which takes place probably a few weeks before this), and the Obi-Wan who finally ends Darth Maul on Tatooine just ahead of his time with Luke and the gang.

And this is the recreation, showing more physicality and emotion behind each swing of the laser sword:

For good measure, here’s the first fight between Obi-Wan and Darth Vader, which is missing the part where Anakin tells Obi-Wan to give his son his lightsaber when he’s old enough: