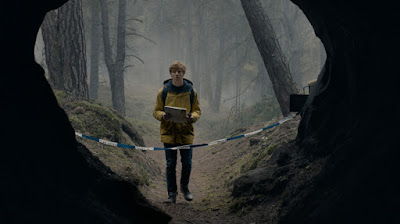 D  A  R  K
[Source: Syfy] Dark, the Stranger Things-esque Netflix drama that's earned a quick cult following, has been ordered for a second season, Variety reports. After making a big splash with Season 1's debut — and earning glowing reviews — the mind-bending series has mostly broken free from these comparisons and garnered popularity in its own right.
“When we first heard about Dark, we realized very early on that we hadn’t seen anything like this show before — in Germany or anywhere else in the world,” Netflix’s VP of international originals, Kelly Luegenbiehl, told Variety of the series, which arrived on Netflix earlier this month after an appearance at Toronto International Film Festival.

The supernatural German-set and -produced series involves the disappearance of children and the negotiation of nostalgia and reality in equal measure — not to mention some big twists that see the story unfold in two different time periods.

Netflix also said that Dark is one of the few non-English shows on its platform to break through and reach audiences around the world, although the company hasn't provided hard numbers on that.

Creators Baran bo Odar and Jantje Friese, both of whom will return for the second season, said in a statement that they “are thrilled that our story has been a success with a global audience. And our fans can be sure that we have plenty of surprises in store for the second season of Dark.”
Posted by anim8trix at 12:00 AM