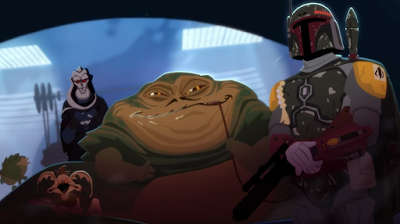 STAR WARS: Galaxy of Adventures
[Source: Syfy] Whether you've just returned from the Black Spire Outpost at Disneyland's Star Wars Land, are reading the latest Marvel Star Wars comic, or are just dreaming of December's Star Wars: The Rise of Skywalker, take a pause in your day to ingest this latest pair of Galaxy of Adventures animated shorts starring your favorite bounty hunter and smuggler, Boba Fett and Han Solo. These bite-sized Star Wars treats delivered fresh out of the Disney/Lucasfilm oven via the Star Wars Kids YouTube channel are aimed at a slightly younger Star Wars audience but are certainly entertaining to fans of all ages.

The first half-dozen Galaxy of Adventures toons debuted last fall and are crafted using remixed animated interpretations of classic Star Wars Saga sequences blended with authentic sound effects and screen dialogue by director Barry Kelly and Titmouse Animation. Weekly offerings are sprinkled across the online site and the official webpage at StarWarsKids.com and include Fun Facts clips educating us on the billion-dollar franchise's broad range of aliens, monsters, spaceships, and droids.

That notorious jet-packed bounty hunter Boba Fett starts us out in the first of two new animated amusements. Witness how this fierce Mandalorian warrior becomes the most feared assassin in the galaxy, blasting deadly missiles from his back, zooming in for the kill, encasing Han in carbonite, and piloting his wicked starship, the Slave I.