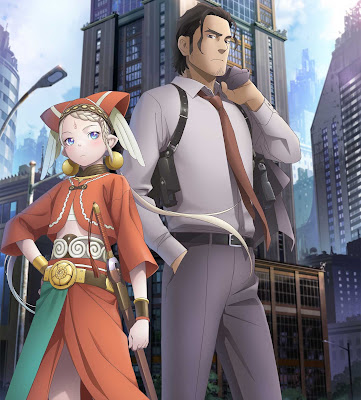 C O P  C R A F T
Plot Summary: [Source: Wikipedia] 15 years ago, a mysterious hyperspace gate appeared over the Pacific Ocean in our world. Elves, fairies, and other fantastic creatures came through the gate from the other side and established diplomatic relations with Earth. In the present day, Kariana Island and its main city of San-Teresa serves as Earth's "front door" to the magical world on the other side of the gate, and over two million non-humans live within the city, mixing with additional human residents. This results in both prosperous growth for the island, and a seedy underbelly of criminals who seek to take advantage of it. The San-Teresa Metropolitan Police Department is established to keep order within the city between those two forces. After a drug bust goes horribly wrong, Detective Sergeant Kei Matoba loses both the fairy being sold as a catalyst for new drugs and his partner of four years in the Metropolitan Police to a Semanian attacker. Despite his attitude towards the Semanian people he derisively calls "aliens," Matoba is forced to partner with a Semanian knight to find the fairy lost in the drug bust, as they consider the fairy an important Semanian citizen. From there, Matoba slowly learns to tolerate the Semanian people, while the knight slowly acclimates herself to Earth and its customs. 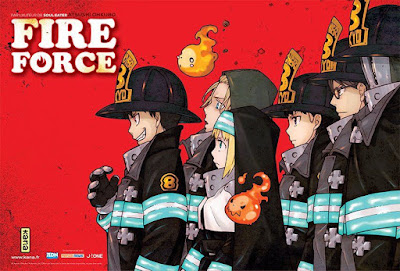 FIRE FORCE
Plot Summary: [Source: Wikipedia] Year 198 of the Solar Era in Tokyo, special fire brigades are fighting against a phenomenon called spontaneous human combustion where humans beings are turned into living infernos called "Infernals" (焰ビト Homura Bito). While the Infernals are first generation cases of spontaneous human combustion, later generations possess the ability to manipulate flames while retaining human form. Shinra Kusakabe, a third generation pyrotechnic youth who gained the nickname Devil's Footprints for his ability to ignite his feet at will, joins the Special Fire Force Company 8 which is composed of other flames users as they work to extinguish any Infernals they encounter. As a faction that is creating Infernals appears, Shinra begins to find out the cause of a mysterious fire that killed his family 12 years earlier.
Posted by anim8trix at 12:00 AM