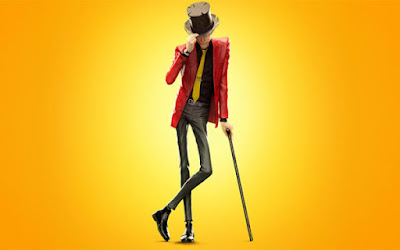 LUPIN the 3RD goes 3D
[Source: AnimeSuperhero] What is the world’s sneakiest thief, Lupin the 3rd, up to now? And how will Inspector Zenigata catch him now that he has a Z-axis?

A new Lupin the 3rd movie was just announced by Toho Animation, called Lupin III: The First. For the first time, it renders Lupin and his allies / frenemies in CGI, and though that might make you apprehensive at first, they’ve actually made it work. The transition between dimensions was pretty seamless here; everyone looks and moves as they should.

Gunman Jigen, swordsman Goemon, flirtatious Fujiko Mine, and the man himself all appear in the minute’s worth of clips we get; there is plenty of action, death-defying leaps, frustration and/or humiliation on the part of Zenigata, and Lupin’s iconic yellow car.

Lupin’s movie career has been an exercise in extremes. Nothing could truly top Lupin the Third: The Castle of Cagliostro, the first feature from animation legend Hayao Miyazaki.

Lupin III: The First will be out December 6 in Japan; a US release has not been announced yet. Lupin’s creator, Kazuhiko Kato aka “Monkey Punch,” died last April.
Posted by anim8trix at 12:00 AM