Arson Attack at Kyoto Animation Studio
Source: sfgate] TOKYO (AP) — A man screaming "You die!" burst into an animation studio in Kyoto, doused it with a flammable liquid and set it on fire Thursday, killing 33 people in an attack that shocked the country and brought an outpouring of grief from anime fans.

Thirty-six others were injured, some of them critically, in a blaze that sent people scrambling up the stairs toward the roof in a desperate — and futile — attempt to escape what proved to be Japan's deadliest fire in nearly two decades. Others emerged bleeding, blackened and barefoot.

The suspect, identified only a 41-year-old man who did not work for the studio, was injured and taken to a hospital. Police gave no details on the motive, but a witness told Japanese TV that the attacker angrily complained that something of his had been stolen, possibly by the company.

Most of the victims were employees of Kyoto Animation, which does work on movies and TV productions but is best known for its mega-hit stories featuring high school girls. The tales are so popular that fans make pilgrimages to some of the places depicted.


Residents of the densely populated Fushimi Ward neighborhood, responding to the terrified screams and pleas for help, assisted in the rescue of victims, many of whom emerged singed, shoe-less and bleeding -- some leaving bloody footprints on the sidewalk.

Prime Minister Shinzo Abe expressed his condolences to the victims of the blaze in a tweet, calling it an "arson murder spree."

"I'm speechless," Abe said. "I pray for the souls of those who have passed away. I would like to express my condolences to all of the injured and wish them a speedy recovery."

Work to recover the dead and wounded from the building was slowed by the instability of the badly damaged structure.

The suspect was burned on his feet, hands and chest, and collapsed nearby while attempting to flee, officials said. As he was treated for the non-life-threatening injuries, police said he confessed would remain in custody. Police said multiple knives were also discovered at the scene.

Police did not give a motive, but a witness told Japanese TV that the attacker complained that something of his had been stolen, possibly by the company, the Associated Press reported.

A total of 67 employees were on duty, police said. Of those, 10 were discovered in a state of cardiac arrest on the second floor. One victim was quickly declared dead and ten others sustained serious injuries, while 26 others escaped with light injuries.

The incident occurred around 10:35 a.m. local time, at Kyoto Animation's No. 1 studio. An expert interviewed by CBS News partner network TBS TV said the compactness of the approximately 7,500-sq. foot structure and the fact that there was only one exit made it especially vulnerable to an attack on the building's entrance. The perpetrator apparently went to great lengths to plan the crime and obtain gasoline, the sale of which is tightly controlled in Japan; it is not sold in containers.

Fans from around the world took to Twitter to urge donations and to express disbelief, horror and sadness. "Kyoto Animation are a rarity in the anime business," wrote Twitter user Mike Toole. "They treat their people well, they strive to own part of their works, and their creations are constantly excellent, at the very least on a technical level."

A user named AalalasesPen said, "To think it was only a few nights ago that my friends and I gathered…to watch A Silent Voice. I'm at a loss for words."

Devin Howard wrote simply, "Why the hell would somebody do this???"

Some speculated that the suspect might be a disgruntled "otaku," a Japanese word referring to socially awkward "nerds" who obsess over anime and manga comic books. In recent years, reclusive obsessives have been blamed for committing sensational crimes -- a charge anime fans say unfairly and inaccurately characterizes both those who enjoy cartoons, and the estimated 1 million or so "hikkikomori," or social recluses.

"It's not 'otaku commits crime,' but the criminal happened to be a consumer of anime," a 20-something female anime fan was quoted as saying in the Business Journal publication. Anime and manga are so pervasive throughout Japanese society, she said, that it is unfair to accuse the pop culture of fostering criminal minds. 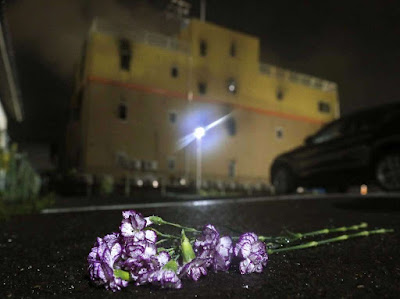