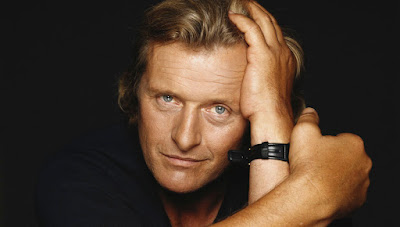 RUTGER HAUER
(January 23, 1944 - July 19, 2019)
Rutger Hauer Rewrote His Iconic ‘Blade Runner’
Monologue, Added ‘Tears in Rain’ Himself
[Source: Yahoo!] Rutger Hauer has died at age 75 after suffering from a short illness (via Variety), leaving behind an acting career that includes one of the most memorable monologues in science-fiction film history. Hauer starred opposite Harrison Ford in Ridley Scott’s 1982 classic “Blade Runner.” The late actor appeared as Roy Batty, a rebellious replicant who confronts Ford’s Rick Deckard. In one of the most famous “Blade Runner” scenes, Roy recites a short monologue while dying in the pouring rain.

“I’ve seen things you people wouldn’t believe,” Roy says. “Attack ships on fire off the shoulder of Orion. I watched C-beams glitter in the dark near the Tannhäuser Gate. All those moments will be lost in time, like tears in rain. Time to die.”

The speech only lasts about 50 seconds, but Hauer’s introspective performance and Scott’s gorgeous close-up work are in such perfect harmony it’s no wonder why the “tears in rain” monologue became one of the defining moments of both “Blade Runner” and Hauer’s career. In an interview with Radio Times back in 2017, shortly before the release of “Blade Runner 2049,” Hauer looked back on the iconic monologue and revealed he “took a knife” to the original script and rewrote his character’s dialogue.

“I kept two lines, because I thought they were poetic,” Hauer said. “I thought they belonged to this character, because somewhere in his digital head he has poetry, and knows what it is. He feels it! And while his batteries are going, he comes up with the two lines.”

The two lines Hauer kept from the original draft of the speech were “attack ships” and “C-beams.” Hauer believed the original speech was written in a way that was too operatic, a tone he felt a replicant would never use.

“You know, I think a lot of scripts are overwritten,” Hauer said. “The overwritten stuff comes from the writer and all the executives, but the audience can feel it, and even the best actor cannot sell me with language that is overwritten. I am fucking allergic to that. OK?”

Hauer credited Scott with giving his actors the freedom to change things up based on how the actors were interpreting the characters. “Ridley gave me all the freedom, because he wanted it to be a character-driven story,” the actor said. “He’d never done a film character-driven. He said, ‘This is what I want to do – bring me anything you can come up with, and I’ll take it on if I like it.’”

Scott clearly loved what Hauer came up with for the speech’s final “tears in the rain” line. “I was hoping to come up with one line where Roy, because he understands he has very little time, expresses one bit of the DNA of life that he’s felt,” Hauer said. “How much he liked it. Only one life.”

Following “Blade Runner,” Hauer would go on to star in films such as “The Hitcher,” “Sin City,” and “Hobo With a Shotgun.” The actor’s television work included roles on “True Blood” and “Channel Zero.” No matter how many projects Hauer worked on following “Blade Runner,” his “tears in rain” speech remained his defining moment of acting.

“The irony is that all I did in ‘Blade Runner’ was… and I’m not saying it’s nothing, but it’s so little,” Hauer told Radio Times.

The late actor is survived by his second wife of 50 years, Ineke ten Cate, and daughter Aysha Hauer.